"The prison door opened, and a prisoner was thrown into the cell. He fell on his face. At first we didn’t recognize him. He was beaten up severely. We turned him around; it was Parviz Ahmadi taken for interrogations just a few hours before." 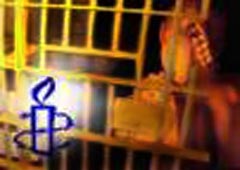 Parvis Ahmadi’s case is one of many cases of human rights violations taking place in the Mujahedin Khalq Organization’s camps that were investigated by Human Rights Watch in May 2005. The famous HRW report on the MKO titled No Exit revealed several cases of basic human rights abuses , based on former members’ testimonies, committed by the MKO authorities.  Parviz Ahmadi died after a few minutes before the eyes of his comrades who were present in the secret cells of Camp Ashraf. He was then listed as an MKO “martyr” killed by Iranian intelligence agents, according to a former member of the MKO interviewed by HRW. [1]

Human rights abuses carried out by MKO leaders against dissident members ranged from prolonged incommunicado and solitary confinement to beatings, verbal and psychological abuse, coerced confessions, threats of execution, and torture that in two cases led to death, according to No Exit report. [2]

As a matter of fact, the world’s enlightened human rights activists were shocked to see Maryam Rajavi the guru of the MKO cult of personality addressed the so-called Iran Accountability Week, a program of hearings at the Foreign Affairs Subcommittee on International Human Rights organized by Canadian parliament. She was introduced by the main organizer of the event Liberal MP Irwin Cotler –interviewed by Ali Gharib of the Nation — as a person only to give “issue-specific testimony”, specifically the alleged killings of MEK members by Iraqi security forces. [3]

Saeed Kamali Dehghan of the Guardian describes Maryam Rajavi as "the leader of the radical exiled group MEK, which was listed as terrorist organization by the US and the UK until recently". "The MEK, characterized by many observers as a cult-like group, has been repeatedly slammed by the United Nation because of mistreating its own members”, he adds. [4]

As Michael Rubin prominent American Journalist asked for the shutdown of concentration Camps under totalitarian regimes like North Korea, he listed the MKO camps as such abusive locations. “While MKO spokesmen may castigate the Iraqi government and the Iranian regime, the real victims of the MKO lay within the group itself," he wrote in December 2013. "Camp Liberty—the successor to Camp Ashraf—exists as much if not more to keep MKO members insulated from the real world and under the control of MKO leader Maryam Rajavi’s commissars than as a means of protection for group members."[5]

Furthermore, one human rights advocate working on Iran, who asked the Nation correspondent  not to be named, raised the issue of other advocates’ sharing a platform with the head of the MEK, which the activist called “toxic and irrelevant” — a view widely held among Iranians of all political stripes, save members of the MEK itself. This way she clarified why the UN Sp Rapporteur Ahmed Shaheed cancelled his speech at the Spotlight on Iran in the Canadian Parliament. [6]

Dr. Shaheed’s assistant explained to Ali Gharib that Shaheed felt the event’s framing “made it feel less like a briefing and more of something that encroached upon what he believes is his independence on the issue” of human rights in Iran.[7]

It is noteworthy that a delegation from Nejat Society including former MKO members and family members of those who are still taken as hostages in the MKO camps visited Dr. Ahmed Shaheed in Geneva last year.  Nejat delegation had a thirty-minute private meeting with Ahmed Shaheed. The delegation submitted the demand of families from International Community and Dr. Shaheed. [8]

Moreover, Nejat Society Family members wrote several letters calling on Human Rights bodies and the international Community to facilitate the departure of residents from camp Liberty so that they would be able to make phone calls, visits and to have access to news of their loved ones. [9]

Considering the illuminating activities by families and ex-members, Dr. Shaheed’s approach towards the presence of the MKO officials in the so-called Iran Accountability Week does not seem bizarre. "In addition to its history of violence, the MEK has, notably, been accused of its own human rights abuses," Ali Gharib stated. [10]

Ann Singleton, former member of the group criticizes Canadian backers of the group who base the allegations about human rights in Iran on the testimony of Maryam Rajavi who "had nothing but MEK propaganda, riddled with lies and misinformation, to tell the assembly". "The MEK itself has a well documented history of human rights violations," She writes. "The group is hated by Iranians inside and outside the country."[11]

Actually, the MKO has intensified its propaganda on the alleged human rights abuses in Iran rather than its nuclear program because it sees itself more vulnerable in human rights violation cases. It sounds to be projecting its own dark background on the Iranian government.

[11]Singleton Ann, Introducing Maryam Rajavi as a human rights activist is the wrong tool for the wrong job, Iran Interlink, May 17, 2014