Mansoureh Karami, the wife of assassinated Iranian nuclear scientist Masoud Alimohammadi, shows the leather satchel, a bound PhD thesis and eyeglasses case used by her husband the day of his death in 2010 and riven with pellets sprayed by a bomb attached to a motorcycle, in Tehran, Iran, on July 15, 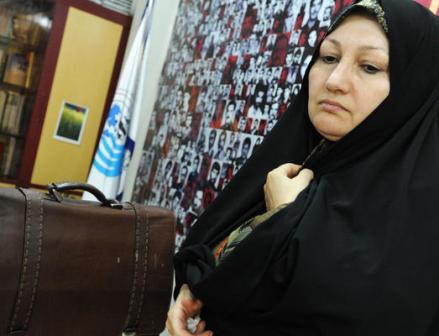 2014. Mr. Alimohammadi was the first of five “nuclear martyrs” scientists killed as part of a US-Israeli covert war against Iran’s nuclear program that has assassinated scientists and included the Stuxnet and other viruses. Iranian Majid Jamali Fashi confessed that he had been recruited by Israeli intelligence for the killing, trained by Mossad in Israel, then sentenced and executed in Iran.

The wife of the first scientist to be assassinated speaks about her husband’s growing fear of a net closing around him – and of meeting his Israeli-trained assassin before his execution.

Tehran — There were no signs of trouble the morning of the assassination.

Iranian scientist Masoud Alimohammadi and his wife woke before dawn and prayed together. Then she prepared breakfast while he made a list of things to do that day.

“He was a very precise person and always wanted everything to go smoothly,” Mansoureh Karami recalls about her husband.

morning Mr. Alimohammadi – a balding man with a thick mustache, close-set eyes, and dozens of published academic papers – said goodbye three times to his wife: when she gave him his packed lunch, as he tightened his shoe laces, and as he got out of his car to close the house’s gate behind him.

That’s when the explosion came.

A remote-control bomb attached to a motorcycle nearby killed the particle physicist with a lethal spray of metal pellets, giving Iran its first “nuclear martyr” and sending shockwaves through Iran’s scientific and nuclear community.

By the time the fifth nuclear scientist was killed, it was less of a surprise. Those working on Iran’s nuclear program had been watching their backs for years.

The covert war waged by the US and Israel against Iran’s nuclear program has seen the assassination of five Iranian scientists, malicious computer viruses like Stuxnet, espionage, and unexplained explosions, as well as several apparent attempts by Iran to fight back in kind, with largely unsuccessful operations from India to Georgia to Thailand.

Iran’s “nuclear martyrs” have been a rallying point for the country’s nuclear program and its “right” to uranium enrichment for years, regardless of the high cost of sanctions. Negotiations in Vienna today seek to curb that program to ensure it can never produce a nuclear weapon – an aim Iran says it rejects.

Alimohammadi feared being targeted for his clandestine work, even though few beside his wife knew that he was anything more than a lecturer, or that he had any nuclear expertise. Alimohammadi detected interest in his work outside Iran that prompted him to travel less.

His assassin was an Iranian operative recruited and trained by Mossad, the Israeli spy agency. News reports from Israel indicate that a televised confession by Majid Jamali Fashi, broadcast on Iran state TV in early 2011, was genuine. Speaking from Tehran’s Evin prison, the young man described his training – which included working with two new Iranian motorbikes, and a perfect replica of Alimohammadi’s street and house – at a station for Mossad, Israel’s spy agency, off the Tel Aviv-Jerusalem highway east of Ben Gurion Airport.

Mr. Fashi pleaded guilty in court, and was sentenced to death. Before he was executed, however, Karami confronted him face-to-face at Evin prison.

“There were many things passing through my mind, of taking revenge,” Karami told The Christian Science Monitor.

She brought the leather satchel her husband used the morning of his death. Eyes brimming with tears, she unpacked it to show how the metal pellets carved through a bound PhD thesis of one of Alimohammadi’s students and tore through his eyeglasses case, breaking the lenses.

Before the meeting, Karami had vowed that, as many pellets as had entered her husband’s head, she would “hammer that many nails in that person’s head.” But when she met Fashi she found a broken man pleading for forgiveness, sobbing so much that he used up an entire box of tissues.

“When I saw him, I saw him being so powerless and small. I said it’s a waste for my hands to expend all this energy [hammering nails],” recalls Karami. She has two grown children, a degree in psychology, and is now pursuing a master’s degree in women’s studies.

“I will never forgive him – there is no place for forgiveness. Because I don’t think he only affected my family, but the whole country,” says Karami, focusing her determined dark brown eyes. “All the people of the world – no matter their beliefs – they still respect their country, and he betrayed his country.”

Alimohammadi had a full public life as a lecturer and quantum field theorist who wrote on subjects from condensed mass physics to black holes. But Karami says there were many signs that his “top secret” nuclear work – unknown even to his mother and sister, says Karami – had attracted scrutiny from outside Iran.

“He was always proud about the fact that the 55 papers he had given were completely different from his nuclear work, so he always said there was a kind of doubt that exists about what he did,” says Karami. She echoes Iranian officials when she adds that the Islamic Republic is not after a nuclear weapon – only scientific development.

Alimohammadi knew he was being monitored by some Western nations and the opposition Mojahidin-e Khalq (MKO/MEK), which in 2002 first exposed the existence of Iran’s uranium enrichment program.

In 2006, for example, a colleague at a conference in Britain was questioned for 24 hours about Alimohammadi’s nuclear activities. In 2008 another colleague was interrogated for 48 hours, perhaps in Italy.

And in 2009, during a hajj pilgrimage to Mecca, Alimohammadi “realized people were filming him and he was being followed,” says Karami. “After that he paid more attention, and went out much less.” A month before his death, he expressed fear he might be kidnapped during a trip to Jordan and felt physically ill before departing.

The couple did not stop their long daily walks in their traditional Gheytariyeh neighborhood in north Tehran or long hikes in the mountains on weekends, but Alimohammadi took precautions.

“Before his death he gave me the number of someone, and said: ‘Whenever I don’t come home, if something happens to me, call this number before calling the police,’” recalls Karami.

When the time came, she says her hands shook so violently that her son had to dial for her.

The making of national heroes

Assassin Fashi was one of 10 agents working for Mossad whose arrests were announced by Iran’s intelligence ministry in January 2011. They were heralded as a “remarkable triumph” that showed “intelligence supremacy over the Zionist regime’s espionage system.”

In his televised confession, Fashi said that after his recruitment at an Israeli consulate outside Iran and travel to Israel, he was shown a scale model of Alimohammadi’s home, exact in every detail from the tree and asphalt to the street curb. Reporting from Israel, Time magazine in early 2012 quoted “intelligence sources” confirming Fashi’s “involvement in a Mossad cell that the sources claim was revealed to Iran by a third country.”

Fashi said in his confession, “They told me that the subject of the operation is a person involved in making an atomic bomb and that humankind is in danger and you are the savior.”

Fashi said that after the attack, “I was very proud that I have done something important for the world and then suddenly realized that what I believed in was a lie.”

Four more assassinations of scientists connected to Iran’s nuclear program followed, three by magnetized bombs attached to their cars while stuck in traffic by motorcycle-riding assailants.

Iran is widely believed to have attempted to strike back with copycat attacks. A magnetized bomb attached by a motorcyclist to the car of the wife of the Israeli defense attaché in New Delhi wounded her and three others in February 2012. On the same day, a similar bomb was found attached to a car close to the Israeli embassy in Tbilisi, Georgia. It was defused.

The killings helped make the nuclear issue one of “national dignity,” says Karami. Portraits of the dead scientists were often shown during press conferences held by Iran’s previous top nuclear negotiator Saeed Jalili, and are frequently displayed on national days such as the revolutionary anniversary. They have achieved hero status in Iran, ranking among the most revered martyrs of the Iran-Iraq war of the 1980s.

“I know a lot of people in my neighborhood who are not pro-revolutionary. But now [after the assassinations], on the nuclear issue they speak completely for the government,” says Karami. “I am certain of our officials, that they will not forget our martyrs.”