Maryam Rajavi’s claim for promotion of equality in her cult is absurd and ludicrous.

Many argue that the hijab is oppressive to women and removing it would enhance women’s equality and freedom. They argue that veiling prevents and limits women’s activities in public. On the other hand, Muslim 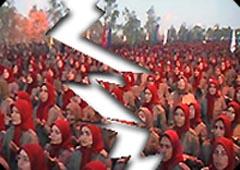 believers of hijab argue that It not only makes a woman feel confident and liberated, but encourages society not to see women as sex objects. They believe that Islam promotes sexual equality, and Hijab allows women to be an instrumental part of the society without being discriminated and looked down. Hijab can also prevent men from ogling look. What about Maryam Rajavi, the leader of the Mujahedin Khalq Organization, the MKO as an Islamic Marxist group? What is her stance about hijab?

Actually, Maryam Rajavi’s idea about hijab is very controversial. She claims in her so-called “ten point plan for future of Iran” that women “will enjoy the right to freely choose their clothing”. However, evidences on what is really going on inside her group indicates that there is no freedom of clothing in the MKO camps.

Perhaps, Elizabeth Rubin the New York Times correspondent, was the first to reveal the cult-like atmosphere ruling the MKO camps including uniform clothing of members, in 2003 after she visited Camp Ashraf. Rubin titled the MKO as “The Cult of Rajavi”. “As you pass the checkpoints and dragons’-teeth tire crunchers into the tidy military town, you feel you’ve entered a fictional world of female worker bees. Of course, there are men around; about 50 percent of the soldiers are male”, she recounts. “But everywhere I turned, I saw women dressed in khaki uniforms and mud-colored head scarves, driving back and forth along the avenues in white pickups or army-green trucks, staring ahead, slightly dazed, or walking purposefully, a slight march to their gaits as at a factory in Maoist China.”

Following the collapse of Iraqi dictatorship and the main financial supporter of the MKO in 2003, the US forces disarmed the MKO. Camp Ashraf was since then guarded by the American army. Having been disarmed and guarded by the MKO’s former enemy the US, members started doubting the group’s ideology. Moreover, the group’s leader Masssoud Rajavi was disappeared. The process of defection of members began.

Disassociated members of the MKO –hundreds of individuals—including female members disclosed shocking realities about the life inside MKO camps. They revealed cult-like and suppressive practices of the MKO authorities. The testimonies of women who had left the group exposed cases of forced divorce, forced celibacy, forced hysterectomy surgeries to make female members barren and particularly sexual abuse by Massoud Rajavi.

Among such abusive treatment against female members of the MKO, forced clothing might be very trivial but it certainly proves the invalidity of Maryam Rajavi’s claims about freedom of choosing clothes in future of Iran. Zahra Sadat Mirbaqeri is a defector of the group who was a member of the second layer of the group’s Elite Council. She was a candidate to marry Massoud Rajavi. She was given the famous necklace with the portrait of Massoud. Fortunately she managed to escape the Cult of Rajavi before she was raped by Massoud.

Mirbaqer challenges Maryam Rajavi’s promise to let Iranian women “enjoy the right to freely choose their clothing’’. She recites her firsthand account of living under regulations and obligations of Rajavi’s cult of personality:

“I was a member of this destructive cult for 23 years. I was not allowed to wear any clothes except the khaki uniform and the green head scarf. Forced hijab was ruled everywhere even in places that only belonged to female members…

“In the cult, women are not allowed to use any kind of hijab except green, khaki and red scarves. However, red and khaki scarves are allowed only for special occasions. You would be punished if you wore your red or khaki scarf in occasions other than the group’s propaganda ceremonies and marches.”

Zahra Sadat Mirbaqeri criticizes Maryam Rajavi’s propaganda for freedom of women quoting a renowned sentence that female rank and files of the MKO were always told:” Scarf is the official uniform of the organization.”