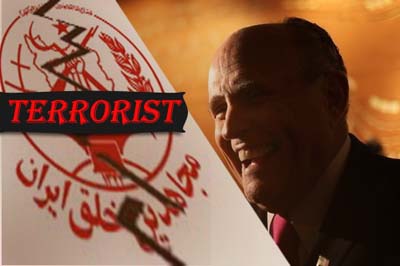 Giuliani, who was speaking at a gathering organized by the anti-Iran terrorist group, Mujahedin-e Khalq Organization (MKO) in the German capital Berlin, called on the Obama administration to take a tougher stance against Iran during nuclear negotiations.

Iran and the P5+1 group of states – the US, Britain, France, China, Russia, and Germany – are holding negotiations to narrow their differences on the outstanding issues related to Tehran’s nuclear program ahead of a July 1 deadline for the final agreement.

Giuliani also spoke strongly in support of giving refuge to members of the MKO living at Camp Liberty in Iraq, located at a former US military base.

“What he (Obama) is doing with Iran right now is extremely reckless and it’s going to create an Iranian-controlled northern Middle East,” Giuliani claimed.

The event venue in Berlin was mostly filled with students lured in from Poland and the Czech Republic. Several told the Associated Press they were offered a return journey and hotel in Berlin in return for their participation in the gathering.

Iran has previously condemned Washington for backing the terrorist group, saying MKO bribes US politicians in order to gain public support in the West.

MKO has been involved in numerous crimes against Iranian citizens and politicians.

Despite the group’s international notoriety, the European Union and the US removed the group from their list of terrorist organizations in 2009 and 2012 respectively