Following the long awaited announcement in Lausanne on the Iran nuclear agreement, your strong opposition to Senator Corker’s legislation has been welcomed by peaceable Iranians and Americans who, like you, support President Obama’s push to resolve the nuclear issue through diplomatic means.

It will come as some surprise to you therefore, that a group of Iranian war-mongering regime change proponents, the terrorist Mojahedin Khalq (MEK), claim to have your support.

In an astounding act of hubris, the MEK has not only appropriated your good name and attached it to a stance which is in contradiction to what you have always stated, but the group has also apparently fooled many of your opponents in Congress whose presence in this event has also been misrepresented as specific support for the MEK.

The MEK’s website Iran News Online reported as a news item a celebration held in Congress on March 17 to mark the Iranian New Year or Norouz. According to this news item, the event was attended by several advocates and lobbyists of the MEK – those named include Ileana Ros-Lehtinen, Ted Poe and Jackson Lee, all of whom advocate the MEK’s regime change stance. As well as around 300 Congressional staff, many, but not all, of the attendees have been Neoconservatives whose anti-diplomacy stance is overtly expressed by people like John Bolton who so recently exhorted America to ‘bomb Iran’.

This is not company in which we would expect to find your name, let alone your endorsement. Yet, the duplicity and deceit and treachery of the Mojahedin is so bold as to allow them to do exactly this.

In this reporting of the event in Iran News Online – written in Farsi, not in English – the MEK have quoted a letter purported to have been written by yourself especially for the event on the occasion of the Iranian New Year. This letter states simply that you “congratulate the people of Iran on their New Year”.

This of course is a natural and commendable ex

The MEK have misreported and manipulated this event so that it looks as though it has been held specifically to promote the MEK and its regime change agenda. I am sure that most of the attendees had no such awareness or intention. 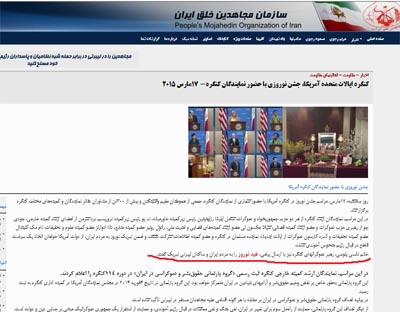 But this is not all. The MEK’s public site Mojahedin.org actually puts words into your mouth as though you were at the event and reports that Nancy Pelosi “Congratulates the people of Iran and the residents of Camp Liberty”. This, of course, is preposterous. These residents, the old and sick remnants of the MEK’s army, are awaiting expulsion from Camp Liberty and Iraq because of the MEK’s thirty year history of terrorism and treachery in that country. The UN mandate is to find them third countries to be transferred to for their safety. (Unfortunately this process has stalled because the MEK leader Massoud Rajavi refuses to cooperate and is holding the residents incommunicado inside Camp Liberty without any access to their families or the outside world. And in addition, most countries shun the MEK as a terrorist outfit and are very reluctant to accept them even as individual refugees.)

The report also quotes you from 2007 when you mentioned the situation of these Iranians in Iraq and said ‘something must be done about them’ in a way to sound as though you supported the MEK. But it is simply amazing that the MEK could think anybody except their own brainwashed members would believe you support such a group except on humanitarian grounds, in which case your support would take a very different form. 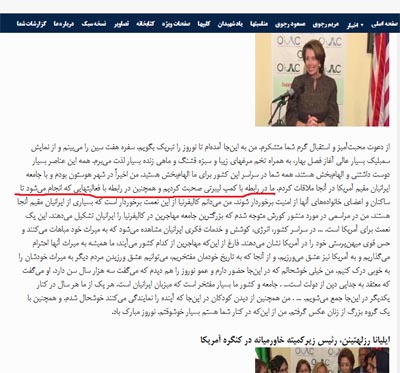 I write to you as an expert on the MEK who has been campaigning for over a decade to help free the residents of Camp Ashraf and Camp Liberty, and to expose the lies and deceit of the MEK’s leaders Massoud and Maryam Rajavi. I would urge you to investigate the matter of your name and reputation being hijacked by this group. But further, I would urge you also to alert your colleagues in Congress – including those who are your political opponents – to the duplicitous methods of this group. The MEK’s unchallenged interference in the political process of America is not only very much against your country’s national interests, it is a slap in the face of those peaceful Iranians and Americans who, like yourself and President Obama have invested so much time and energy into allowing diplomacy to work.