A large number of Republicans are opposing the nuclear deal with Iran and threatening to block it. Following them, some individual American states say that they may keep up their own sanctions against Iran. 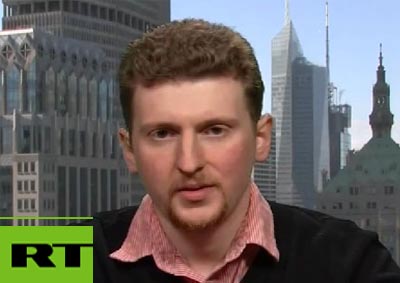 RT: So we’re hearing that individual states may keep their own sanctions against Iran. How likely is that to scupper the deal?

Caleb Maupin: It’s important to be clear that at no point in US history and nowhere in the US constitution is the establishing of foreign policy ever delegated to local and state governments. That has always been exclusively the power of the Federal government. This is yet another maneuver by a cartel of criminal profiteers to try and sabotage any hope for peace between the US and Iran. Many people around the world rejoiced when they heard that the deal had been reached. Yet, the relentless efforts of certain forces to prevent peace and cooperation between countries; and further war and aggression around world- they continue. And we shouldn’t really be surprised.

RT: Could these few individual states in America derail the process? Do they have the power within themselves to disrupt the agreements that have been reached?

CM: Under the authority of the constitution they certainly don’t have the authority to do that. But will they be allowed to continue and try and undermine the efforts going on right now- we will have to see. There is a really a criminal cartel, a section of the wealthy in the US. This is the oil corporations, the military contractors in alliance with the Israeli government and their network of supporters around the world. They are doing everything they can to try and prevent any peace and cooperation between the US and Iran. Civilized people are all over the world want peace and cooperation between nations – this is a basic thing. People in the US with high levels of unemployment, food banks all across this country are having a record demand, as there is a record amount of food insecurity all across this country. We can’t afford more war and aggression. People in the US want peace with Iran. People in Iran want peace with the US; they don’t want to be attacked, they don’t want to be the subject of further sanctions.

The forces that want war are very small but they are also very wealthy and very powerful. This is the struggle of the people against the forces of wealth and power that very much want to further hostility throughout the region. Right now the US is in alliance with Saudi Arabia. As Saudi Arabia murders civilians left and right in Yemen. People are dying. Yet, the US is worried about Iran; yet, there is a talk of attacks on Iran. Who is the real source of aggression in the region?

RT: In addition to those individual states we already know that a large number of Republicans are against this deal too. They say that they are afraid that Iran will “continue to sponsor terrorism.” The breakthrough agreement seems doomed doesn’t it?

CP: The notion that Iran is sponsoring terrorism is an extreme mischaracterization. It is very common throughout the US press. In Bahrain, for example, the Shia community there which is the majority of the people is highly discriminated against… And if you were to believe what CNN, Fox News, and MSNBC were saying, you would think that the only reason people in Bahrain are rebelling against an absolute monarchy is because Iran told them to or something like that. That is outrageous.

All throughout the Middle East there are many countries with complex political situations. There are many people throughout the region who don’t like living under US-backed autocracies like the Saudi Arabia monarchy, or the regimes that they prop up throughout the region and they may be in rebellion. But this is not because Iran told them to. There are people all throughout the Middle East who are upset about the fact that Wall Street controls their oil resources and that people throughout the Middle East are hungry and starving while they have so much oil. These are very wealthy countries. Yet, the wealth of these countries is not under the control of their people. To characterize Iran as sponsoring terrorism is outrageous, especially when the US government and Israel are in alliance with the Mojahedin-e-Khalq which is a vile terrorist organization that has assassinated and murdered people. And the US and the Israeli government are working with them to destabilize Iran.

The US is also working with Jundallah which is the terrorist organization that has been attacking Iran as well. Terrorist attacks have been taking place in Iran by US backed forces. Yet, Iran has attacked no one. Iran hasn’t attacked any of its neighbors, Iran want to live in peace. It is a country that is trying to survive. This is a country that was born in a revolution and in which the forces of wealth and power and Wall Street were kicked out, and they began with nationalized oil resources to develop independently. And of course that is a threat to any of the rich and powerful countries in the West because if one country can break free, other countries can break free, as well. The attack on Iran is an attempt to stifle independent economic development.