The MEK has not only failed to make one iota of progress in all its forty year mission to take power in Iran, but as Eldar Mamedov pointed out in his article ‘Iranian Parliamentarians Discover Brussels’ published in Lobelog,

in recent times the MEK’s regime change lobbying is even failing to make any impact among parliamentarians wise to its lies and deceptions. In short, the MEK’s star is on the wane.

An indication of the anxiety resulting from this change of tide is found in the publication of a book by long term MEK advocate, Struan Stevenson. Reading the blurb, this book looks like a ‘Self Inflicted Wound’; Stevenson admits he was warned off collaboration with the MEK by the UK government and MI5. Why would either Stevenson or the MEK believe that writing about their grubby relationship is a good idea? But then, one reason the MEK have singularly failed to succeed in anything is because nothing they do makes sense. Except, that is, in the warped world of cultic abuse and its belief that the ends justify the means.

The MEK is well-known for its deceptive media and internet campaigns, its hyperbole-filled anti-Iran propaganda and ridiculous self-promotion. But rather than dismiss this book as the work of an MEK stooge, it is useful to briefly examine what is really behind it.

Stevenson tied his career to the MEK presumably because he believed they would aid his own mission to “intensify his attacks on Tehran’s meddling in Iraq”. Now he is no longer an MEP, he has inverted this relationship by working for the MEK’s office in Brussels. The book is a way to perhaps normalise and thereby justify this stance by putting a positive humanitarian gloss on it. Accordingly, he has interspersed his own story with accounts of the self-sacrifice of MEK members, presumably to gain sympathy. But we can be certain there will be not a word from former members of the group or from human rights organisations which have spent two decades documenting the internal harmful practices of the MEK. The 2005 Human Rights Watch report ‘No Exit’ provides a window into the inner workings of this cultic group. Instead, we can be sure that the testimony of former members is dismissed as ‘evidence’ that they are ‘agents of Iran’s Intelligence ministry’ working to keep the MEK on Western terrorism lists. 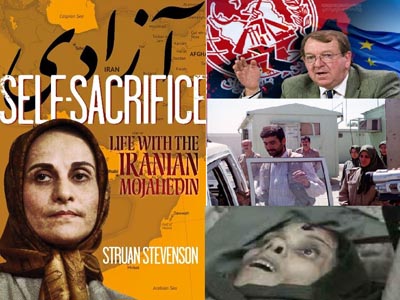 only from its dust jacket. This picture tells its own story, perhaps unbeknown to Stevenson.

The woman pictured is Zohreh Ghaemi. She was one of the MEK’s top commanders. She commanded the team which assassinated General Sayad Shirazi, a popular Iranian war hero in 1999. In September 2103, Ghaemi was among 53 MEK members killed in Camp Ashraf during a raid by masked commandos. The MEK’s several versions of the attack is that it was variously undertaken by unidentified Iraqi or Iranian government sponsored assassins. After extensive investigations by Iraqi officials, hindered only by the MEK themselves, there is very little doubt among experts that this was almost certainly carried out by the MEK themselves – a real Self Inflicted Wound. The purpose was twofold: to cleanse the group of dissidents and unwanted liabilities – like Ghaemi – who had outlived their usefulness, and to assign blame to Iran as part of the long term MEK regime change narrative.

Thus the cover of this book is the story behind book: the MEK’s willingness to shed the blood of its members in its relentless and pernicious attempts to promote regime change in Iran through false narratives.