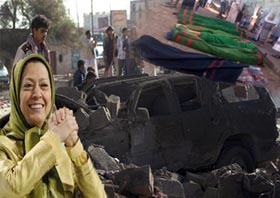 The terrorist Mojahedin-e Khalq Organization (MKO, also known as MEK, NCRI and PMOI) voiced its readiness to help the Al Saud regime in its aggression against Yemen.

MKO Leader Maryam Rajavi in a meeting with Saudi Ambassador to Paris Mohammad Al Sheikh said that the group is willing to cooperate with Riyadh to carry out its attacks against the Yemeni nation.

She reiterated that whenever Saudi Arabia asks MKO for help, the group will immediately provide assistance to the Al Saud regime.

Rajavi and Al Sheikh have met several times in Paris so far and Rajavi has thanked the Al Saud regime for its support and financial assistance over the past years.