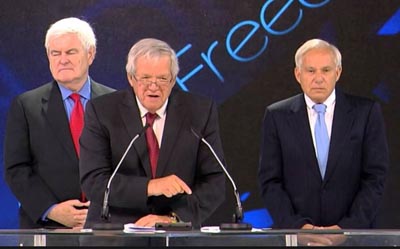 Papers from the former House speaker’s congressional years suggest there was more than a touch of hypocrisy in his long record as a staunch social conservative.

Just before his election as House speaker in 1999, Dennis Hastert spearheaded legislation to prevent use of the Internet to encourage sexual acts with children. As he often did, Hastert invoked his personal history “as a father and a person who has dealt with public schools for a long time” to urge passage.

“We must continue to be proactive warding off pedophiles and other creeps who want to take advantage of our children,” Hastert said, according to an account of an Internet forum he held in his congressional district.

Known among his colleagues as “the Coach,” Hastert cultivated a nice-guy image and man-of-the-people persona during his years on Capitol Hill. But papers from Hastert’s congressional years suggest that there was more than a touch of hypocrisy in Hastert’s long record as a staunch social conservative.

Long after he’d become a powerful figure on Capitol Hill, Hastert reflected often about the values and strategy he learned in 16 years teaching at Yorkville High School in Illinois. He never gave a hint that there was a darker side to his early career as a teacher, coach and Explorer Scout leader, a picture that has begun to emerge since his May 28 indictment on federal charges.

“I’m sure you can understand how important wrestling is for the development of adolescents in their crucial high school years,” he wrote in a 2005 letter to a retiring Maryland wrestling coach. “And in my role as Speaker of the House, I still employ many of my old coaching techniques while trying to achieve our goals here on Capitol Hill.”

Hastert, 73, was arraigned Tuesday on charges that he arranged nearly $1 million bank withdrawals to avoid filing disclosure reports, then lied to the FBI about it. The money was allegedly part of a $3.5 million payment Hastert agreed to make to an unidentified former male student over what was reportedly past sexual misconduct. The sister of another former Hastert student, who died two decades ago — Steve Reinboldt — has accused Hastert of victimizing her brother but said the family never sought money.

Hastert’s extensive collection of personal papers and memorabilia, housed at Wheaton’s Billy Graham Center for Evangelism, offers few clues about his relationships with former students or insights into any of the ethical scandals that rocked the House during his tenure as the chamber’s longest-serving Republican speaker. A Wheaton archivist gave POLITICO permission to review the files but asked that extensive document use be approved by Hastert’s former chief of staff, Scott Palmer. Palmer did not return phone calls or emails.

The records show that Hastert’s office kept a legislative file titled “Homosexuals,” filled with policy statements from social conservative groups like the Traditional Values Coalition and the Family Research Council that criticized same-sex marriage and Clinton administration efforts to prevent discrimination against gays and lesbians. The file also includes a 1996 Weekly Standard article, “Pedophilia Chic” that warned that “revisionist suggestions about pedophilia” were being embraced by the left.

Hastert co-sponsored a successful effort to impose stiff federal criminal penalties for Web-based pedophiles, a cause that he said was inspired by a mother’s visit to his Batavia district office. The woman told Hastert that her 9-year-old daughter had been targeted on the Internet by a sexual predator, creating such fear that the family moved to a city in Hastert’s district. Hastert issued a concerned letter to constituents to flag the dangers.

“This bill sends a strong message to the most heinous of criminals who prey upon our children — you will be punished to the fullest extent of the law,” Hastert said at the time.

Hastert billed himself as a social conservative from his earliest days in the Illinois Legislature, when he sided with the Moral Majority to fight a bill barring discrimination against gays.

The Hastert congressional files show that his influence escalated dramatically with his selection as speaker. Republican members wrote him to try to schedule floor debates and appealed to him for seats on their favorite committees. His mailbox was filled with requests from members like former former Arizona Rep. Jim Kolbe who wanted re-appointment to the board that supervised the House page program, and Florida Rep. Mark Foley, who wanted to join a parliamentary exchange with NATO countries.

“The need to represent U.S. interests and work to strengthen our ties with NATO is more pressing now than ever before,” Foley, from West Palm Beach, wrote to Hastert in December 2004.

Two years later, Foley led Hastert into one of the biggest scandals of his career. Foley was accused in 2006 of sending sexually explicit text messages to male teenagers in the House page program and showing up inebriated at the page dormitory. Hastert’s office was criticized for failing to act promptly when Foley’s behavior was first reported. The House page program never recovered and was disbanded in 2011. There appear to be no hints of that scandal in Hastert’s papers.

Throughout his congressional years, Hastert traveled widely on taxpayer-funded congressional delegations with staff and other members, leading CODELS to Russia, Korea, Israel and Colombia. He collected gifts — a sterling silver clock from 10 Downing Street, an etching from Russia — and eventually donated them to the archives, along with boxes of awards from groups like the National Pork Producers Association and the Boys & Girls Clubs of America.

After resigning in 2007 to pursue a lobbying career, Hastert again ventured far from his Plano, Illinois, home with adventures in Singapore and Saudi Arabia. Some of the travel and push for greater income came in 2010, when federal prosecutors contend the former speaker struck a deal to pay an acquaintance $3.5 million to keep quiet about Hastert’s “past misconduct.”

Because of the federal charges, Hastert’s early dealings with legal and judicial figures are getting special scrutiny. The federal judge assigned to Hastert’s criminal case, Thomas Durkin, formally recused himself Tuesday because of perceptions about his ties to the former speaker and others involved in the case. However, the judge said he would not ultimately step aside if both the prosecution and defense agree he should continue.

At Hastert’s arraignment, Durkin detailed his work with Hastert’s son Ethan at a Chicago-based law firm and $1,500 in donations made to the former speaker’s reelection campaigns over a decade ago. Durkin also noted that his brother Jim is the Republican minority leader of the Illinois House.

Hastert’s archival files reveal yet another connection: Jim Durkin once lobbied Hastert to block proposed federal legislation that would have ended a program offering prosecutors a public-service forgiveness for student debt. “This is not a time in which government should be eliminating resources but rather investing resources in a system whose integrity has been challenged,” Jim Durkin wrote to Hastert in 2000.

If the current judge gives up Hastert’s case, the former speaker’s files show ties to other judges who might take it over.

In a 2005 thank-you note, then-Illinois Solicitor General Gary Feinerman said he was “deeply grateful” to Hastert for his support in a potential nomination for a federal judgeship in Chicago. Feinerman didn’t make it to the bench at that time but got the nod from President Barack Obama in 2009 and was confirmed to the lifetime post the next year. (Judge Durkin acknowledged in court Tuesday that he’d sought similar help from Hastert’s office to win his appointment.)

The Hastert records also show federal judges in Illinois reaching out to him for help funding courthouse renovations and increased security after the 2005 murders of the husband and mother of U.S. District Court Judge Joan Lefkow. One such plea came from the chief district court judge in Chicago at the time, Charles Kocoras, who asked Hastert to give more resources to the U.S. Marshals Service for security systems for judges’ homes and other security measures.

Hastert’s files don’t appear to contain a reply. Kocoras is now overseeing a federal civil lawsuit filed against the former speaker by an ex-business partner, David John, who claims Hastert used taxpayer funds to advance his lobbying career. Kocoras has dismissed the case twice but another attempt to refile the suit is pending.

Hastert’s files also show that in 2005, Hastert met with top leaders of the FBI in Chicago to urge them to combat money laundering in connection with drug trafficking. Hastert now stands charged with a type of money-laundering offense, known as structuring, for breaking nearly $1 million in cash withdrawals into increments of less than $10,000 in order to avoid federal reporting requirements.

In the main, though, the records illustrate the rise of an Illinois farm boy to a government leader who mingled with presidents and foreign potentates. The files also show how ordinary folk from Illinois— including some former students — streamed into Hastert’s Capitol Hill office and signed the guest register.

The archives include notes of thanks and friendship from nearly every former U.S. president alive during Hastert’s tenure as speaker. “I am so very proud of your leadership,” George H.W. Bush wrote on a Walker’s Point card in 2001, adding a “#41” to his signature.

“Thanks for coming to the ranch,” President-Elect George W. Bush wrote in December 2000. “Together we can make a real difference for our country.”

President Bill Clinton penned a handwritten thank-you note to Hastert for coming along on a trip to South America. “The day in Colombia was great,” Clinton wrote in 2000.

A 1999 note from former President Jimmy Carter said he and wife Rosalynn enjoyed Hastert’s appearance on a PBS show and “appreciate the difficulty of your job and also the way you are approaching your duties.”

There are personal notes from Indian Prime Minister Manmohan Singh and Afghan President Hamid Karzai. A letter from singer Bono declined an invite to a St. Patrick’s Day event but called a Hastert-hosted party at the 2004 GOP convention “hugely memorable.”

Hastert’s 2005 surgery to remove kidney stones brought well wishes from politicians of all stripes. “I don’t know what brings those on — raising hell with Democrats?” Sen. Dick Durbin (D-Ill.) joked.

The papers also hint at Hastert’s religious devotion. One file includes a copy of music from a church hymnal and, on the opposite side, an extremely ornate cross hand-drawn in ink.

In the lower right hand corner, the sketch is signed: “Dennis Hastert.”

Tarini Parti contributed to this report.

playing with Mojahedin as the football

Mujahedin Khalq are not democrats or freedom fighters