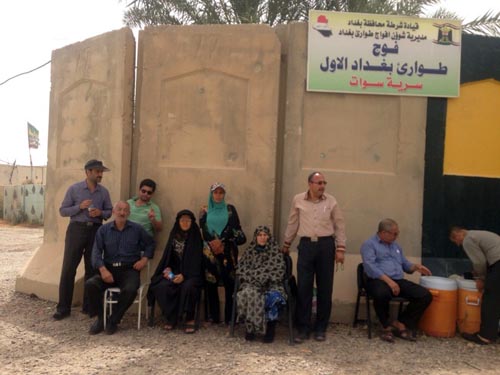 On Sunday 14th June, a number of Iranian families met with Iraq’s Human Rights Minister and asked him to intervene to allow interviews with their relatives in Camp Liberty, and stressed they need “only a few minutes” with them. The Ministry of Human Rights confirmed that the Mojahedin Khalq (MEK) leaders’ rejection of the requests of these families was based on “their relatives’ refusal to meet them because of the need to protect the lives of the members of the organization”.

Hussein, who is with the group of families, told Almada Press in an interview that, “we have many times tried to see our relatives despite the MEK’s claims that they won’t meet us, and we have had the help of all the parties involved including the Iraqi Ministry of Human Rights and the Red Cross. He pointed out that “all we want is an interview for a few minutes to check on [the wellbeing of] our relatives who have been with this organization for decades without contact with us.”

For her part, Hosna, the daughter of one of the members of the MEK Organization, told Almada Press, “I have repeatedly tried to meet with my father, whom I haven’t seen since I was born – he joined the MEK when I was only was 45 days old – but all attempts have failed. And after moving to Camp Liberty, this camp has very high walls and I cannot see him inside there even from a distance”. She continued, “the only time I have seen him was when they were in Camp Ashraf in Diyala province, when I saw him from far away without talking to him”.

In a meeting with the Iranian families and the press at the ministry’s headquarters, Iraq’s Minister of Human Rights said “We have a responsibility as a state to protect the lives of these people according to agreements made between Iraq and the United Nations, and we respect all the international resolutions, but their presence in Iraq is only for a limited period of time”. He noted, “We will not withhold any assistance that can be provided [to the families] and we will work very hard to secure the needs of these families who have come to meet their relatives in Iraq.”

Mahdi continued, “The members of this organization numbered more than 3,000 in their camp in Diyala province during the era of the former regime. Following the ouster of that regime their demands to stay in Iraq were rejected by successive Iraqi governments because their continuation in Iraq is prohibited by law and the Iraqi constitution.” He pointed out that, “the Iraqi authorities are trying to expel them from Iraq in cooperation with the United Nations and US forces (when they were in Iraq).”

Mahdi said, “The families of these individuals, now and earlier, have flocked to Iraq to see them but always faced rejection by the organization which argued that its members do not want to see their loved ones coming from Iran.”

Mahdi said, “We are trying to provide all the facilities possible to enable these families to see their loved ones, and we will take their names and the names of those who they want to see in order to complete this interview process between the individual parties involved”. He pointed out that “all previous attempts failed because the leaders of the individuals inside the camp always rejected such visits or interviews”.