Mostafa Mohammadi has been trying to meet with his long lost daughter Somayeh for many years now. He has travelled to Iraq on several occasions only to be turned away by the cruel cult which holds his daughter hostage. Now Mostafa has taken his cause right to the door of the cult’s headquarters in France. 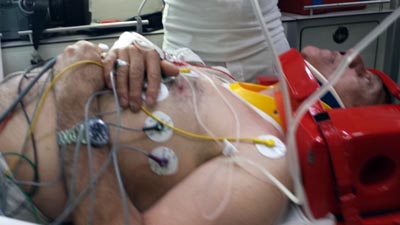 On Friday 12 June 2015, Mostafa visited Maryam Rajavi’s residence in Auvers sur Oise, the terrorist cult’s secretive enclave just outside Paris. He was accompanied by his other daughter Hooriyeh. Mostafa had been advised by his lawyer, who accompanied them on the visit, to make one last legally documented request directly to the leader of the group which is holding Somayeh. Only then, the lawyer advised, should Mostafa could go ahead with a legal complaint against Maryam Rajavi in France where she resides.

The Mojahedin-e Khalq (MEK) reaction was shocking. Instead of answering the door and listening to the legal request, and answering either negatively or in the affirmative, the cult leader Maryam Rajavi simply sent out a gang of thugs to beat him up along with Hooriyeh and the lawyer.

Although police intervened to prevent more serious injury an ambulance was called and Mostafa was hospitalised overnight.

Why is it impossible for the MEK leader to refrain from attacking people in a quiet French village where the residents are already sick to death of the group?

Mostafa made it clear that if he had wanted to provoke the group he would not have gone with his French lawyer and daughter, but with a gang of other plaintiffs against the cult – there are many.

But like any cult, the MEK is existentially afraid of the truth and of people exposing its inhuman and illegal activities. Maryam Rajavi would rather her cult be exposed beating up an innocent father in a French suburb than answer to the charges put against her in court of law.

Even worse, if she even hints at compromise with one parent, the whole cult will begin to collapse as members ask ‘why can’t we contact our families too?’

Other awkward questions lie behind this simple one. Such as, ‘why, after thirty years, have we made no progress in our struggle to overthrow the Iranian regime?’ And, ‘where is Massoud Rajavi?’ And, ‘why aren’t the residents of Camp Liberty being transferred to safe countries?’

Mostafa’s struggle to meet his daughter is not isolated. Several families are currently stationed outside Camp Liberty in Iraq making the same demand: we want to meet our loved ones. Perhaps Maryam Rajavi is right to be afraid of them. The MEK’s existence now balances on this confrontation, this battle of wills between loving relatives and the cruel cult leader.