The MKO and Islamphobes, Strange Bedfellows

Dressed in headscarves with matching suits, Maryam Rajavi usually appears in the propaganda shows of the Mujahedin Khalq Organization (the MKO) to symbolize a progressive portrait of Muslim women. She promises women’s rights, equality of men and women in a secular democratic government she dreams for future Iran. In the future Iran that she plans to achieve power, people enjoy freedom of speech and freedom of choosing their own covering. She claims that in her ideal Iran Islam and Hijab is not mandatory. She always accuses the Islamic government of Iran of oppressing women and abusing their rights. However, Female members of the Mujahedin Khalq are forced to wear headscarves and uniforms disregarding the severe human rights abuses they are subjected to. 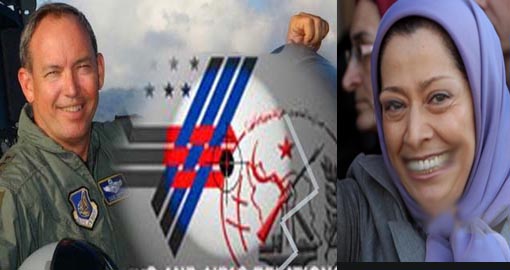 ”The group’s strong presence of women, including leader Maryam Rajavi, is sold as evidence of its commitment to gender equality and secularism,” writes Eldar Mamedov a political adviser for the social-democrats in the Foreign Affairs Committee of the European Parliament (EP)   .  “Never mind the irony of its members in Camp Ashraf — excluding, of course, Mrs. Rajavi — being invariably dressed in uniformed, almost military suits and headscarves, and never mind the documented human rights abuses by the MEK against its own members.” [1]

This extremist cult-like portrait of the MKO had previously become known to the world by the prominent journalist Elizabeth Rubin of the New York Times. In the trip she took to the MKO’s notorious Camp Ashraf in 2003. Rubin describes the atmosphere of what she calls “the Cult of Rajavi” as “a fictional world of female worker bees”. She implicitly compares “a photograph of Maryam in a white dress and blue flowered head scarf” with “women dressed in khaki uniforms and mud-colored head scarves, driving back and forth along the avenues in white pickups or army-green trucks, staring ahead, slightly dazed, or walking purposefully, a slight march to their gaits as at a factory in Maoist China.” [2]

As a matter of fact, the MKO leaders endeavor to pass themselves off as democratic progressive Muslims as an alternative for the government in Tehran. However, the majority of the group’s supporters in the West is consisted of anti-Islam politicians who detest Islam and particularly Islamic Republic.

The world of anti-Muslim Islamophobia knows no bounds. Islamophobia has been raised since 9/11.  In this regard the politicians have profited the most from the development of the idea of “war on terror”. Its consequence was the endless wars on Afghanistan, Syria, Iraq, and others to eliminate the so-called Islamic terrorist extremists. Paradoxically, the leader of the MKO, Massoud Rajavi showed up as one of the supporters of the September 11th attack. He praised the attackers celebrating the death of hundreds of innocent Americans in Camp Ashraf on September 11, 2001. (Testimonies of former members of the MKO proves the fact.) [3]

As the main Islam phobic body, the lobby of Zionists in the US government, AIPAC has strived to frustrate the nuclear deal. Eli Clifton  of the Nation describes AIPAC’s efforts to derail diplomacy with Iran , “On Thursday, the AIPAC-funded Citizens For a Nuclear Free Iran (CFNI) released its third television commercial and its first attempt to put forward a retired military officer, Ret. Lt. Gen. David A. Deptula, as a voice against the deal.” [4]

According to Clifton’s investigations, Deptula is a supporter of the MKO who appears in their events frequently while he is a vocal Islamophobe figure.  Clifton clarifies,” In April, Deptula signed on to a letter supporting the House Foreign Affairs Subcommittee on Terrorism, Nonproliferation, and Trade’s controversial decision to invite MEK leader Maryam Rajavi to testify.” An Obama administration official told Al-Monitor at the time that, “[The MEK] has shown time and time again that they’re not the most credible voices,” and warned lawmakers to be wary of any claims made by Rajavi’s organization. [5]

Clifton cites from a previous article authored by him and his colleague Ali Gharib in which they expose Deptula’s extreme opposition against Islam:

“But vouching for the MEK’s intelligence capabilities isn’t Deptula’s only brush with fringe foreign policy views. In April, Deptula signed on to a Center for Security Policy letter praising the highly controversial “Open Letter to the Leaders of the Islamic Republic of Iran” assembled by Sen. Tom Cotton (R-AR) and 46 fellow senators, a letter that Obama characterized as part of an effort, led by Cotton, to “make common cause with the hard-liners in Iran.”

“In January, Deptula signed another letter, alongside Frank Gaffney. Gaffney, Deptula, and the other signatories, congratulated Louisiana Governor Bobby Jindal for comments he made at a Henry Jackson Society event in London. The letter praised Jindal’s harsh remarks about Islam,

“It is high time that the rest of our present and future leaders come to grips with the unhappy reality you observed so succinctly when you said: “A so-called religion that allows for and endorses killing those who oppose it is not a religion at all, it is a terrorist movement.”

Deptula’s decision to sign letters organized by Frank Gaffney—a leading figure in pushing conspiracy theories about Muslim Brotherhood infiltration of the U.S. government and questioning whether Obama is a native-born U.S. citizen—strongly suggests sympathy for, if not identification with, the Republican far right.” [6]

Therefore, when Islamophes turn out to become sponsors of Massoud Rajavi’s cult of personality, one should be wary about the complexity of hypocrisy in the war on terror. Hypocrisy always makes strange bedfellows.

[3] On the occasion of the anniversary of September 11, many people have written their personal memories about Massoud Rajavi’s reaction and the celebrations he ordered in support of Al Qaida. Rajavi said, “if they represent Reactionary Islam, we are Revolutionary Islam, and we can do ten times more”. Writers remind us that Rajavi changed his tune when America invaded Iraq and the MEK suddenly acted as if they had been American since birth. Rajavi was able to change sides in a matter of months because he leads a mercenary force. Iran-interlink