Democratic Centralism was once a principal of the Communist Party Organization by which members take part in policy decisions, and elections at all levels but must follow decisions made at higher levels. Many Marxist –oriented groups formed during early years of the 20th century and eventually during the 1960s in Iran tried to 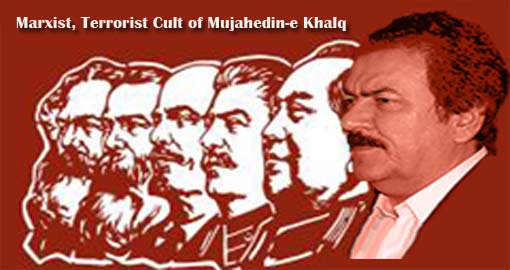 follow the principals of democratic centralism. This was a catastrophic legacy that the communist parties have left the Mujahedin Khalq Organization, too.

As for the MKO this legacy turned into a human tragedy. Democratic Centralism became a tool of domination over all members of the group. The so called struggles for liberation of the Khalq – ruled by Massoud Rajavi- produced a totalitarian cult of personality that required members to obey the leader blindly. Massoud Rajavi’s monopoly of power illegalized all criticism and opposition against the leadership.

Democratic centralism was supposed to be based on democracy in deciding and unity in action but this was not practically fulfilled. Particularly in the MKO, while the formulation of democratic centralism traditionally promoted election of all positions, this has not been done in the group. The leader of the MKO has not been changed for nearly 40 years. Besides, all the positions in the group’s hierarchy are assigned by the superior officials. Thus, election is unheard of in the MKO.

In fact, the convergence of power and centralization, created a situation in which the method of determining leaders became shadowy in practice. In the ceremony they call elections in the MKO – which is only held for a few high- ranking members– one person is introduced for a position by his superiors, then the audience is asked: ”Does anyone oppose this election?” definitely, nobody dares to express his opposition. No one raises his hand. This way, the person is determined for the position!

Historically, the decline of democracy has been repeated in all structures under democratic centralism. The most notable example is the former Soviet Union. As the central bodies are empowered in these structures, the power is eventually shifted away from membership. Members of the MKO also became a tool of carrying out orders of Massoud Rajavi rather than being empowered and developed to think and act as creative corps. Moreover, members are forbid from expressing disagreements to their superior officials.

Central bodies of the MKO attempt to manage information and perception of events to maintain their own dominance. Therefore, the democratic centralism has turned into a dictatorship in practice. Centralism seems to be an undemocratic notion in essence. Any kind of dictatorship under any name or motivation is unhuman. Furthermore, the history has showed that these kind of structures of power are not stable and consequently will lead to a lot of negative results. The main and the worst result might be the slavery of thousands of people inside the MKO Camps.

Who are the Iranian dissident group MEK?

Who are the Iranian dissident group MEK?