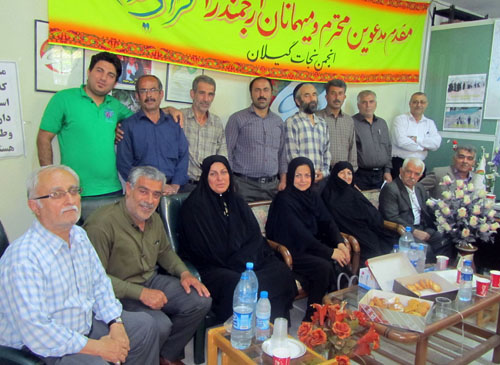 Mr. Esmaeil Fallah Ranjkesh who has recently defected the Cult participated the meeting. He was warmly welcomed by the families. The families were so eager to hear Mr. Fallah’s experiences within the MKO Cult and the way he managed to liberate himself from the group.

Mr. Fallah said:” at first I should thank God for guiding me to be able to find my way out of a destructive cult after 27 years of captivity. I thank God for I can now live my life among my family members …. “ 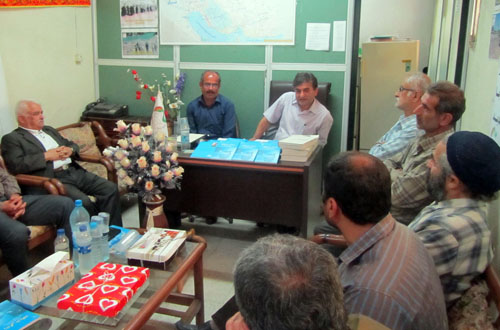 Mr. Fallah referred to the MKO leaders lies about the families and defectors of the group – being all agents of the Iran Intelligence service- and said when I stepped the meeting and among you I recalled those nonsenses.

Mr. Fallah then briefly recounted his years of captivity behind the bars of MKO Cult. He was a prisoner of Iran-Iraq War when the MKO agents tricked him into joining the group:

“ Rajavi had lost a big number of its members at the so called Eternal Light Operation and the remaining members were exhausted of the futile struggle. so as, in a dirty deal with Saddam Hussein, he tried to deceitfully recruit the Iranian prisoners at Iraq’s prison camps.

I had tolerated severe sufferings during three years of imprisonment at Saddam’s Camps. On the other hand I had no information about the Mujahedin Khalq Organization. Hence I was tricked into joining the group and along with some other POWs, I was transferred to Camp Ashraf first as a guest, as they told us.

Witnessing the realities at the group Camp Ashraf, most of the POWs who had joined the group asked to repatriate to Iran. Subsequently, the group shifted to another dirty trick:

Because of staying at MKO Camp for some time, you will be tortured and executed by the time you return to Iran, they told us. However if you insist on leaving the organization you will be handed over to Saddam Hussein’s Intelligence service and will be imprisoned at Abu- Ghoraib prison.

Though time and again I asked to leave the group, I forced to stay with them and tolerate the dictatorial, oppressive affairs of the cult. Finding no way out of the group, I lost several years of my life at MKO Camps.

Eventually, the families’ presence at Camps Ashraf and Liberty gates gave me enough courage and confidence to release myself from the Cult of Rajavi.

I drew my escape plan. In the evening of a stressful day I came out of the container. I looked around and at a suitable moment ran into a gap within the concrete barriers of Camp Liberty. I was full of stress, anxiety, joy and hope. All of a sudden about 10 MKO members rushed after me. They invaded and beaten me. I shouted and asked for help. Fortunately an Iraqi soldier helped me and I went to the Iraqis guarding room at Camp Liberty gate.  …. the Iraqis handed over me to the UNHCR representatives. Then I was transferred to Mohajer Hotel in Baghdad. I was very scared because of what I had heard about Mohajer Hotel. As soon as I arrived the hotel I was welcomed by the ex-members of the MKO who was residing there. No harassment, no torture. I could contact my family and Nejat Society head at Gilan; Mr. Purahmad.

However I couldn’t believe what I saw, because of the false propaganda of MKO that I had in my mind. I still thought I would be tortured, imprisoned and executed once I return to Iran. Nonetheless coming back to my homeland, I was warmly welcomed by my family members and Nejat Society families.

Now I can decide my own fate. I live with my family members and in my own hometown; Astaneh Ashrafiyeh City.

The most glorious moment of my life was when I warmly embraced my family members and especially my mother after 27 years.

Every day I thank God for such felicity. ..