Supporting the MKO is big waste of time and money,vice chair of the Foreign Affairs Committee of the French Senate said.

Tehran and Riyadh have to make effort to bear each other and restart a dialogue, Nathalie Goulet, vice chair of the Foreign Affairs Committee of the French Senate told Trend. 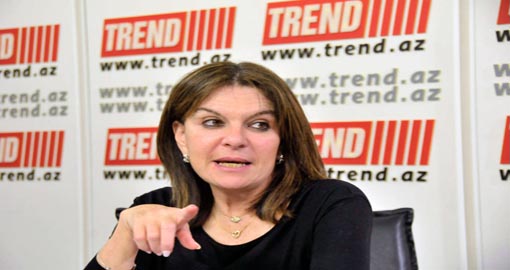 MKO is considered a terrorist group by Iran because of its history of assassinations and bombings against Iranian authorities and for siding with former Iraqi dictator Saddam Hussein during the eight-year Iran-Iraq war in the 1980s, which resulted in about a million casualties from the Iranian side.

“The most challenging issue is to restore trust and get rid of irrational fears or feeling of superiority between Iran and Saudi. The world security needs both KSA and Iran,” Goulet said.

Goulet said that the Kingdom of Saudi Arabia (KSA) was known as a major oil producing country in the world and stayed out of the limelight before the Gulf War.

“When Saddam Hussein targeted Saudi Arabia in retaliation to the US offensive, the Kingdom was alarmed that it needed better defensive measures. The regional events after the new millennium encouraged the Kingdom to take on a more active role in the region. The economic power of the country grew steadily and helped the Kingdom to establish itself as one of the major players in the region,” the senator said.

She added that with the current administration in Saudi Arabia and their desire to play a more constructive role in regional peace and stability, France welcomes such efforts.

“France and the Kingdom remain good partners in fighting terrorism worldwide and are determined to uproot this global disease. Of course we do have other partners in the region, sharing the same goal and we will work hard to create a stronger and stable consensus to speed up the counter terrorism efforts,” said Goulet.

Riyad is a member of US-led coalition in fight against Islamic State (IS) terrorist group and Iran also helps Iraq and Syria to battle against this group separately.

Goulet said that France welcomes the true efforts of KSA to control financing of terrorism, however, it’s obvious that restoring peace and security in the Middle East will not come overnight.

She added that as the guardian of the two holy mosques in Mecca and Medina, KSA has to play a major role in fighting Islamic extremism.

“I had the chance and the privilege to meet HRH Muhammed Bin Salman and Foreign Minister Al Jaiber in Paris. I fully trust their will to be successful in their vision of KSA 2030. Our standards are really far from KSA’s rules and regulation. More cooperation will help a lot to achieve the goals,” she said.

Coming to MKO’s meeting in France and participating of a former top Saudi official there, Goulet said that “we always encourage the countries in the region to establish closer relationship for more enduring regional peace. The recent gathering of exiled Iranian terrorist group in France known as MKO and presence of some Saudi figures hopefully shall not be interpreted as position of current administration of KSA”.

Members of the MKO fled to Iraq in 1986, where they enjoyed the support of former Iraqi dictator Saddam Hussein, and set up Camp Ashraf near the Iranian border in Diyala.

The group has carried out numerous terrorist acts against Iranian civilians and government officials. The terror organization is also known to have cooperated with Saddam in suppressing the 1991 uprisings in southern Iraq and the massacre of Iraqi Kurds in the north.

Goulet said that the MKO is a big imposture and tries to appear as a solution for a replacement of Iranian regime.

“Anyone involved in the regional policy knows that MKO has no foot print inside Iran and have in fact acted as mercenaries against Iranians during the Iran-Iraq War. Even if you dislike the Iranian regime, supporting the MKO will not help to get a new regime. No one in Iran will support MKO as it betrayed this country by supporting Iraq during a terrible war," Goulet said.

She added that supporting MKO will just bring more solidarity among Iranian people and will create more misunderstanding between the two nations. “It is big waste of time and money,” she added.