BAGHDAD — A camp housing members of an Iranian opposition group in Iraq was officially closed after the last 280 residents were flown to Albania on Friday, the group said.

The Mujahedeen-e-Khalq has been based in Iraq since the 1980s, when they received arms and support from Saddam Hussein during the Iran-Iraq war. U.S.-led forces disarmed the group after the 2003 invasion and settled them at a base north of Baghdad.

Late Friday night a car bomb targeting a shopping mall in eastern Baghdad killed 11 people and wounded 28, according to police and hospital officials. Three Iraqi policemen were among the dead, the officials added.

All officials spoke on condition of anonymity as they were not authorized to brief the press.

The attack comes as Iraqi ground forces are moving into position around Mosul ahead of a planned operation to retake the militant-held city from the Islamic State group.

The Iranian opposition group, whose members who were flown out of Iraq Friday, was listed as a terrorist organization by the U.S. State Department for years over its killing of Americans. The MEK was also accused of taking part in the brutal suppression of a 1991 Shiite uprising against Saddam, allegations denied by the group.

The MEK says it renounced violence in 2001. The U.S. military in Iraq signed an agreement with the group in 2004, promising that members would be treated as “protected persons” under the Fourth Geneva Convention. The State Department removed the group from its list of terrorist organizations in 2012.

“We are grateful to the Government of Iraq for facilitating the departure of the MEK. And we are specially appreciative of the extraordinary efforts of the Albanian Government, the Albanian Prime Mister Rama, to welcome these people who are in need of international protection,” Trudeau said.

U.N. Secretary-General Ban Ki-moon thanked member states and international organizations for “the successful resolution of this humanitarian issue,” in statement issued by his spokesman.

Iraqi forces raided Camp Ashraf, the group’s longtime base north of Baghdad, in 2009, shortly after U.S.-led forces handed over responsibility for the camp to the Iraqi government. The group was later relocated to a former military base in the capital.

Armed groups have repeatedly attacked the group since Saddam’s ouster, killing scores of its members.

While the casualty figures could often not be independently verified, the United Nations repeatedly expressed concern about the safety and security of residents of the group’s camps.

The group said last year that more than 20 members were killed in a missile attack on their camp, but the figure could not be independently verified and the MEK has made exaggerated claims to the media in the past. 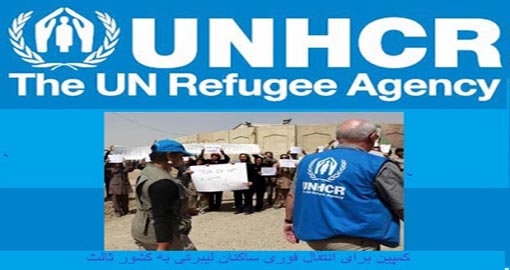