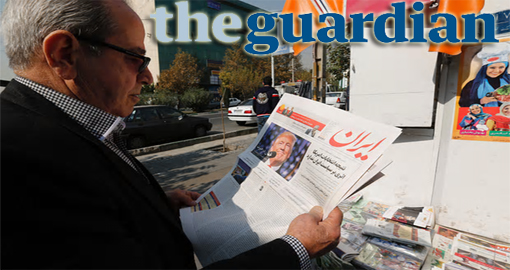 If Trump walks away from the agreement, Iran will revert to its previous policy of enriching uranium that could someday be used to create a nuclear weapon

In March 2016, Donald Trump gave a speech to the American Israel Public Affairs Committee (Aipac). He was forthright about his support for Israel should he become president. He was particularly strong on Iran, and on the nuclear deal with Iran negotiated by Obama, saying straight off: “My No 1 priority is to dismantle the disastrous deal with Iran”.

But dismantling the deal with Iran will not be so easy. In addition to Iran and the US, there are four other signatories – the UK, France, China and Russia, all of whom are convinced that the deal is important and valuable. Even Saudi Arabia seems recently to have come round to the idea that it’s better to have the deal than to lose it. If Trump acts against the deal (or even if he just sits back and allows Republican hawks to enact new sanctions legislation) it is to be expected that the Iranians will walk away from it and revert to their previous policy: enriching uranium that could someday be used to create a nuclear weapon. That would be bad for Israel and everyone else, and would also make Trump look bad.

Some missed it at the time, but there was another strand to Trump’s Aipac speech – a hint of something else. He said the deal was bad – “… and we got absolutely nothing in return”. A little later he said that at the very least, he would enforce the deal “to hold Iran totally accountable”.

It has to be the working assumption, for now, that a Trump presidency is worse for the prospects of the nuclear deal than a Clinton presidency would have been. But it may not necessarily turn out that way. Trump has suggested that he might work with the Russians to destroy Islamic State in Syria, which would in effect mean working with Iran too.

In the Aipac speech and repeatedly elsewhere, he has stressed his self-image as a dealmaker, and also his desire to put America first, and (one of his strongest campaign messages overall) to correct allegedly unbalanced international trade arrangements that disadvantage the US. Might he seek a new deal with Iran, with a major trade element, in return for not tampering with the nuclear agreement? Trump would present such a deal as creating new jobs and benefiting US industries. It would give the US the benefit from the nuclear deal that Trump claims Obama failed to secure, putting Trump ahead of Obama on his own ground by positive action. The idea fits well with a whole range of Trump’s declared priorities, and if successful, would make him look good.

To make this happen, or indeed to come up with any Iran policy with any chance of success, Trump will need good foreign policy advice. It’s not easy to see where that might come from. One candidate spoken of as a possible secretary of state under Trump has been John Bolton, whose favoured policy toward Iran has been to bomb the country. Others mentioned have been Newt Gingrich and Rudy Giuliani. All three of these candidates have something in common: they have spoken in support of the MKO, an exile opposition group (also referred to with an alphabet soup of other acronyms – MEK, PMOI, NCRI, etc). The MKO pays public figures to support them against the Iranian regime.

The MKO is a bizarre organisation. As it is today, it resembles a kind of religious cult, brainwashing its adherents, taking their money and property, and separating them from partners and families. It was removed from the state department’s list of terrorist organisations in 2012, but prior to that perpetrated bombings and assassinations within Iran. It originated in the 1960s as a violent Marxist-Islamic group opposed to the Shah; in the 1970s, it killed US servicemen in Iran, among others. It gave significant armed support to the revolution in 1979, but lost out to [Ayatollah]Khomeini’s supporters in a bloody power struggle thereafter, was forced into exile, and later was based in Saddam Hussein’s Iraq. Because it fought on Saddam’s side against Iran during the Iran-Iraq war, it has since then been completely discredited with ordinary Iranians in Iran. No one with any claim to sound judgment, let alone high office, should have given the MKO their backing.

Another possibility in the air for secretary of state is Bob Corker, Republican senator and chairman of the Senate committee on foreign relations – strongly conservative, but an altogether safer choice.

The coincidence of Trump’s election and Leonard Cohen’s death prompted me (and not only me) to recall lyrics from Cohen’s song The Future: “Things are gonna slide – slide in all directions … ” It’s important for the Middle East as a whole that, with so much else on the slide, the Iran nuclear deal is not.