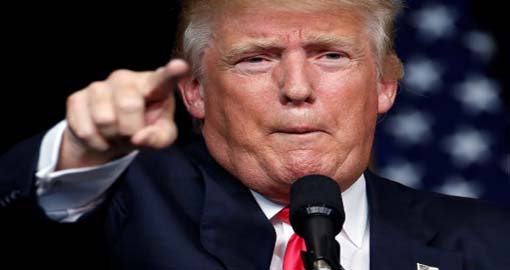 These days we are hearing that Trump may choose the most hawkish American figures for crucial posts in his administration. The majority of these figures are naturally paid supporters of the Mujahedin Khalq Organization (the MKO).

Regarding the group’s massive lobbying activities in the US Congress and large amounts of money it has spent to buy supporters, a hawkish warmonger Trump administration is what the MKO has been dreaming of for years. However, the affairs do not look to be as easy as the group supposes.

The MKO propaganda praises certain nominees that Donald Trump has settled for Secretary of State because they are its top paid speakers in its propaganda events. Daniel Benjamin, former coordinator of Counter terrorism Bureau of the State Department was one of the targets of the group before it was removed from the FTO list in September 2012. He writes an op-ed in the Politico Magazine in which he thoroughly discusses the MKO’s huge lobbying campaigns to buy supporters in the US Congress and administration, particularly in the State Department. Based on Benjamin’s experience, he suggests, “No designated terrorist group had ever mounted a campaign like this before. Indeed, as a stampede of hogs to the trough, it was astonishing by any Washington standard.”

As Daniel Benjamin is not sure about the source of the MKO lavishly donated funds, he is sure about five-figure sums that ensure many supporters of the group to ignore its dark background of violence and terror. “Those who embrace the group show an alarming lack of concern about its past and heedlessness about core principles of American counterterrorism policy,” he writes. “Exactly where all the money came from remains unknown. Most of those who hitched their wagon to the MeK appeared to be getting $15,000 to $20,000 or more per appearance at these public events, and they were presumably happy to add their names to whatever open letters demanding better treatment for the group that were put in front of them.”

The former coordinator of counter terrorism office of the State Department warns about the hypocrisy of the MKO leaders and the reality of the undemocratic relations inside the MKO camps. “Even more unsettling was the sheer creepiness of the group,” he asserts. “While Maryam Rajavi was presiding over enormous conferences with American political celebrities and seas of smiling, waving people in Paris, at Camp Ashraf, the MeK leadership treated its people appallingly. Visitors, including from the U.N., painted a picture of relentless intimidation, shaming and coercion of the inhabitants by camp leaders. The MeK, which is often described as a cult, had a long history of requiring that its members divorce and remain celibate.”

“The love affair with the MeK continues to mystify,” writes Benjamin. “For some, like Bolton, there is clearly an unshakeable certainty that the MeK will play a role in changing the regime in Tehran. Bolton’s reputation for dogmatism is well-earned in this case: Serious scholars of Iran all agree that the MeK is universally loathed in Iran, where no one forgets its service to Saddam or its slaughter of Iranian conscripts and others.”

In case of other MKO advocates such as Giuliani, Benjamin proves that he is mostly motivated by the MKO’s hefty payments rather that its cause. He suggests, “With Giuliani, as perhaps with Gingrich and others, the attraction to the MeK may be more grounded in plain old greed than foreign policy.”

“According to a financial disclosure reported on by The New York Times, Giuliani has been speechifying at hyper speed for years, collecting $11.4 million for 124 appearances in just one year—and that was before signing up for the MeK gravy train around 2011. Perhaps he just didn’t have time to consider the character of his paymaster,” adds Daniel Benjamin.

As a matter of fact,Trump’s White House appointments, with links to the Cult of Rajavi definitely causes concerns over the future foreign policies of the White House but it should be taken into consideration that the MKO lacks any public support among Iranians. So, the US government will be entirely discredited if it follows the illusions of people like John Bolton or Rudy Giuliani. Besides, the US is not independent on its foreign policy towards Iran. As a normal US policy, it might impose secondary sanctions against Iran and on European companies to prevent them from having business with Iran. Obviously, this tactic will not work with Russia, China and India who have taken steps to disconnect their economy from the U.S. economic system. Moreover, the EU states do not seem to be satisfied with the presidency of Trump and evidently they do not seem to agree with his probable aggressive foreign policy. The Cult of Rajavi is betting on the wrong horse again.