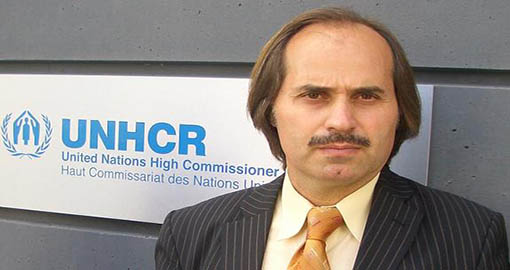 Mr. Mohammad Hossein Sobhani ; former high ranking member of the Mujahedin-e Khalq Cult wrote an enlightening article- in persian on the occasion of the release of 50 MKO dissident members from the Abu Quraib – the Iraqi Baath regime prison.

The article reads:” January 21st reminds me and others – who were prisoners of Abu Quraib, of the bitter as well as sweet memoirs of our freedom from that gruesome prison. In January 21, 2002 a number of 50 MKO dissident members whom were handed over to the Iraqi former dictator; Saddam Hussein by Massoud Rajavi, got released by the help of international organizations.

Honoring this day, I want to remind Massoud Rajavi and Mujahein-e Khalq that we do not let their treasons and crimes be forgotten….it is very bitter and regrettable to see an organization which claims to be after freedom, equality, justice, democracy and monotheistic classless society But imprisons dissent members and those who were no more willing to cooperate with the organization in solitary confinements for years and then hand them over to Saddam Hussein; the Iraqi former dictator. Saddam relatively imprisoned them at Abu Guraib prison under the name of “Mujahedin’s loan “[ Amanat-e Mojahedin ]. We, MKO dissident members, had committed no crime…  “

Mr. Sobhani, went to Iraq as a member of the Mojahedin-e Khalq in the early 1980s. In 1992, Mr. Sobhani declared his doubt and dissatisfaction with the group leader – Massoud Rajavi’s strategies. Since then he underwent a prolonged period of imprisonment .

Mr. Sobhani is one among hundreds of individuals who victimized by the MKO leaders.

The 28-page report, "No Exit: Human Rights Abuses Inside the MKO Camps," examines how dissatisfied MKO members were tortured and held in solitary confinement. The report is based on the direct testimonies of a dozen former MKO members, including five who were turned over to Iraqi security forces and held in Abu Ghraib prison under Saddam Hussein.

Mr. Sobhani is one of these five witnesses:

” Mohammad Hussein Sobhani spent eight-and-a-half years in solitary confinement inside the MKO’s main camp in Iraq, Camp Ashraf, from September 1992 to January 2001. He was subsequently held in Abu Ghraib prison and left Iraq in 2002.

Sobhani first came in contact with the MKO in 1977, a year before the anti-monarchy revolution. By 1979, he was working “professionally and full time” with the organization. When the headquarters of the armed wing of the organization relocated inside Iraq, he followed suit. By 1991, he had risen in the ranks of the organization and had become a member of the Central Committee. However, ever since the “ideological revolution,” when divorces were mandated, he became uncomfortable with the path pursued by the leadership. His differences with the leadership of Masoud and Maryam Rajavi and other members of the Central Committee reached a climax in 1992. Masoud Rajavi argued for remaining in Iraq regardless of the end of the Iran-Iraq war and Saddam Hussein’s defeat in the first Gulf War in 1991, he said. Rajavi still hoped that fighting between Iran and Iraq would resume, and based the organization’s strategy on such a development. Sobhani says he found the possibility of a new war highly unlikely given the dismal state of Iraq’s armed forces. Other members of the Central Committee saw his arguments as a challenge to the Rajavis’ leadership:

As long as my criticisms were mild, I was left alone. But as soon as I persevered in my questioning, their behavior changed dramatically. In the beginning, I discussed my concerns personally with the leadership, Maryam and Masoud Rajavi. I also brought up my concerns with other members of the Central Committee. These discussions reached a dead-end. Once they became certain that I didn’t share their views, on August 28, 1992, they convened a meeting (neshast taiin taklif) to determine my faith and to decide if I was staying with the organization or not. The process began with intimidation, verbal abuse, and beatings. Of course, since I was a high ranking official I was treated better than ordinary members. I was told that my criticisms and questions were just an excuse to quit the struggle. Their conclusion was that I was a quitter (borideh) and didn’t have the strength to continue the struggle any longer.50

On August 31, 1992, Sobhani was moved to a prison and kept under solitary confinement for the next eight-and-a-half years.

After the first two months in prison, all of my beliefs in the organization fell apart. Up to that point I considered my differences with them as a matter of divergent political views; I wasn’t questioning the MKO’s underlying essence. I used to mark my prison walls each time I was subjected to severe beatings. There were many occasions of lesser beatings, but on eleven occasions I was beaten mercilessly using wooden sticks and thick leather belts.51

Sobhani was handed over to Iraqi officials in January 2001. He spent one month in mukhabarat  prison and then transferred to Abu Ghraib. He was held in Abu Ghraib until January 21, 2002, when he was repatriated to Iran in exchange for Iraqi POWs. In Iran, he was detained and interrogated by the Iranian government. After three days, he escaped from a low security detention center and fled Iran. He is currently living in Europe.

Joe Stork, HRW’s Washington director said:” Members who try to leave the MKO pay a very heavy price,"… These testimonies paint a grim picture of what happened to members who criticized the group’s leaders."