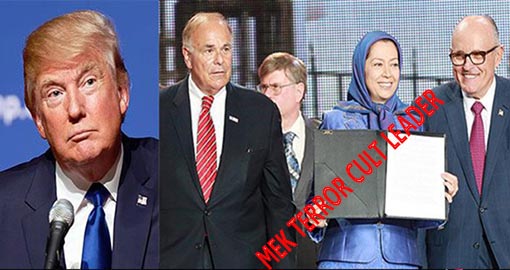 While protesters rally worldwide in solidarity with women’s marches against Donald Trump in the United States, 23 former US politicians call on Trump to consult with the Mujahedin Khalq Organization (the MKO/the MEK/the Cult of Rajavi) that is notoriously known for horrible cases of women’s rights abuses. Paid supporters of the MKO found the opportunity appropriate to present their suggestion to the new president who seems to be the right person to launch the agenda of warmongers.

The MKO has for years cultivated prominent former US officials to advocate on its behalf and help it project an image as an alternative to the Islamic Republic, which it says it wants to replace with “a secular democratic republic”. However, a large number of western journalists and scholars and politicians have repeatedly warned about the group because of its cult-like nature and its dark history of terror and violence.

Yassamine Mather of the Weekly Worker writes about the MKO, “For those who do not know much about the MEK, let me assure you it is one of the most discredited exile groups – nowadays more a religious cult, with practices similar to the Moonies (in recent years we have seen enforced mass divorce, enforced mass remarriage, worship of the married couple who are the cult’s leaders, a switch from supporting Saddam Hussein to becoming paid lackeys of Saudi Arabia …)”.

The Trump administration did not give any official response to the letter, and it’s unclear whether Trump has any plans to take a meeting with the MKO and its affiliates but it seems that common agendas and characteristics of Trump and the MKO are so numerous that the signatories of the letter want them to be closer. The MKO is in essence very similar to the US warmongers. The leader of the group Massoud Rajavi has always been a dogmatic lunatic person who never bear any criticism, let alone opposition. The way Trump treats his critics attacking journalists and media recalls the reactions of the MKO authorities who label every critic as an agent of the Iranian government, so an enemy.

Trump’s presidency was like an outburst of violence. His immediate orders for restrictions on US entry for citizens of seven predominantly Muslim countries, including Iran and for building a wall in US-Mexico border have shocked the world while the MKO and its paid supporters are looking forward for their share in this outrageous administration. According to Yassamine Mather, Trump’s fans are “amongst deluded sections of the Iranian opposition, including the MEK, who are convinced that sooner rather than later he will go for a full-scale military attack on Iran, or else give Netanyahu the nod to knock out its military and nuclear installations (while the US concentrates on ‘fighting al Qa’eda’ in Iraq and Syria!).”

The MKO propaganda machine in its turn makes efforts to take advantages of the new US president who is surely a capitalist. Surprisingly, it’s been decades that the group propaganda has left all principal values of the organization that was once founded on anti-American and anti-Imperialism ideals. “It was no longer fashionable to talk of imperialism and capitalism. Now they were against ‘backward Islamists’ and for ‘progress’”, asserts Yassamine Mather.