Former US Army officer Joachim Hagopian said US Senator John McCain is using MEK, a terrorist cult, as his proxy war ally in the US covert war against the current Islamic Republic of Iran government. 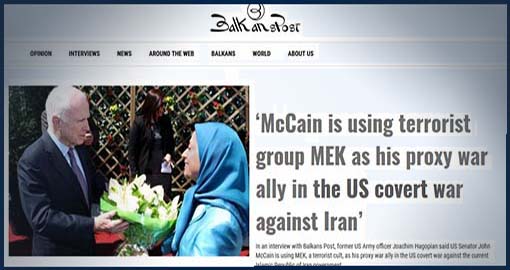 Joachim Hagopian who is a West Point graduate and former US Army officer is also a regular contributor to Global Research, Sott.net and LewRockwell.com. In an interview with Balkans Post, he was asked about the meeting that former Arizona Senator John McCain had last month with the leader of the terrorist group Mujahedeen Khalq Organization (the MKO/ MEK/ the Cult of Rajavi).

Hagopian is a critic of the US war mongers’ campaign. He has so far published several articles on the US-backed terrorists in the Middle East.  He suggests that the MKO are “the same terrorists that killed American military and civilian personnel in pre-revolution Iran” while it is “touted by the warmongering McCain as courageous freedom fighters.”

This is not the first time that Hagopian slams McCain for his support for terrorists and his hawkish hunger for war. Back in December 2015 he published a post on Global Research where he denounced John Mccain and Lindsey Graham –another MKO sponsor—for their push for more aggression in the Middle East. “Fast forward to four decades and three war defeats later, and our government is still sending Americans off to fight and die in Afghanistan (9800 currently) and Iraq (3500 with another 100 on the way), and now in Syria (50 just proposed with more on the way while war-hawk Bobbsy twins McCain and Graham are calling for 20,000 more troops in Syria),” he wrote. “But this century’s wars we keep hearing red, white and blue, flag waving Americans urging us to “support our troops.”

Besides, it was on March 2017 that the US veteran accused McCain for accepting bribe from another state sponsor of the MKO terrorists, Saudi Arabia. “A year ago McCain was also caught accepting a one million dollar bribe from the House of Sin, I mean Saud, the world’s biggest financier of the world’s biggest terrorist group that the chicken hawk’s been in bed with for years,” stated Hagopian in LewRockwell.com.

According to Hagopian, in his recent interview he condemns the US’s bullying plan to dominate the world. “It’s an outrage that this treasonous senator makes trips to Albania to pay homage to terrorists and accepts awards from terrorist leaders, groups this traitor’s been in bed with, meeting on a regular basis with America’s so called enemy”, he asserts. “This Iranian terrorist group MEK has murdered 12,000 fellow Iranian citizens out of the total 17,000 who’ve been victims of terrorism.  Like George Soros, McCain is all about war, protecting terrorists and regime change of any nation refusing to succumb to US hegemonic dominance and control, and obviously since 1979 Iran has been in the Empire crosshairs.”

He believes that McCain’s bedfellows including MEK, ISIS, Zionists, AIPAC and Saudi Arabia cannot save his warmonger campaign even if their blackmails mounts to millions of dollars.