Members in destructive cults are cult off the outside world, their families and friends. This is the first step for the cult leaders to manipulate their followers and recruits. Mujahedin-e Khalq cult is not an exception.

Massoud Banisadr, a former member of the MKO in an interview with the Vice reiterates:” I remember one task where we had to write down our old personality in one column on a board, and the new personality in a different column. I remember a guy who said, “My brother works in the Iranian embassy in London. Before I loved him as my brother, now I hate him as my enemy. I am ready to kill him tomorrow, if necessary.” And everyone applauded.”

Members of the MKO destructive cult are deprived to have any contact with their family members. Based on the testimonies of the former members, the contact is allowed just in a few situations under the allowance and supervision of the cult leaders: 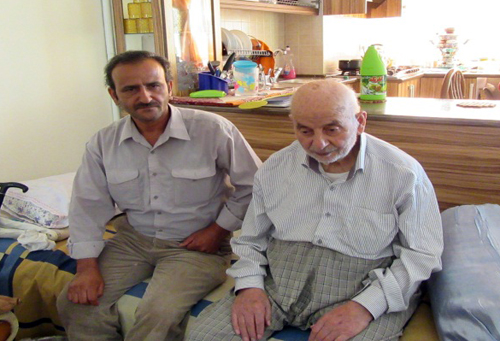 Nejat Society members of the Semnan Province branch visit one of the MKO Cult hostage’s family. The Roudbari family had similar experience.

The aged father talked about his sufferings during all these years. ‘Hassan’s mum died in the eyes waiting to see her dear son once more’, he said sadly.

Hassan’s sister said: “Hassan called some years ago asking us for money. We didn’t. I wondered why didn’t he called us during all these years … the other time he called my son and persuaded him to join the group, promising him good opportunities for education and job in Europe. Fortunately as we were aware of the cult’s trick we didn’t get deceived…”