“In Washington, D.C., money talks. Whether you’re a Democrat like Dean or a Republican like Bolton, a former head of the CIA like Porter Goss or an ex-head of the FBI like Louis Freeh, what seems to matter most is that the MEK can cut fat checks,” Mehdi Hassan of the Intercept asserts.

Reports say that the Mujahedin Khalq Organization (the MKO/ MEK/ PMOI/ Cult of Rajavi) is not the only source of funds for the paid advocates of the group in the Unites States. Money and its potentially corrupting influence in the US politics is so crucial that the journalists Jim Lobe and Eli Clifton have authored an investigated detailed report on the influence of the Jewish Republican lobby on Trump’s words included in his Friday night speech against the Iran deal: 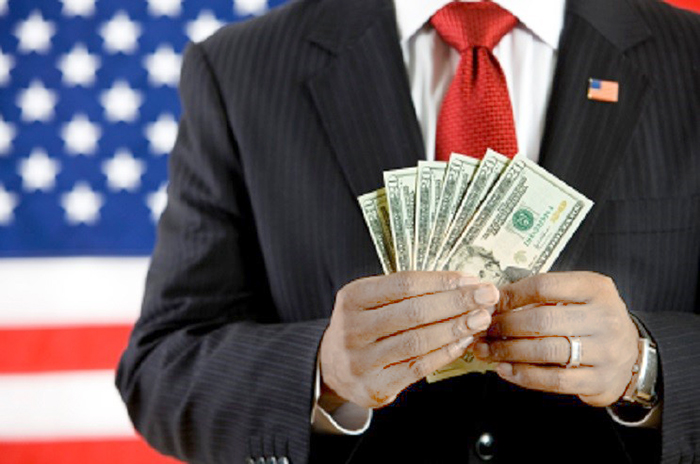 by Eli Clifton and Jim Lobe

Although much of the Washington commentariat has depicted Trump’s extraordinarily bellicose speech Friday against Iran and the nuclear deal as the latest example of his determination to undo the legacy of his predecessor, meeting the demands of his most important campaign donors may well have served as a major motivation as well. Indeed, his biggest campaign donor, casino billionaire Sheldon Adelson, may have influenced the specific language Trump used in his remarks.

Trump rejected the reported views of his own national security adviser and secretaries of defense and state by refusing to certify Iran’s compliance with the 2015 Joint Comprehensive Plan of Action (JCPOA). But he also echoed talking points developed by organizations, notably the neoconservative Foundation for Defense of Democracies (FDD), that are generously supported by a number of those same donors.

With Watergate back in the public consciousness, in part due to Hollywood’s depiction of Mark “Deep Throat” Felt, it seems fitting to test the relevance of his advice to Woodward and Bernstein to “follow the money” in this case, as in many others.

A hint that this approach may indeed shed some light on Trump’s motivation was offered in a profile of UN ambassador Nikki Haley – the least experienced but most neoconservative of Trump’s foreign-policy team and the beneficiary of $250,000 of Adelson’s political contributions last year – that appeared in Politico Friday. It reported that the most threatening line in Trump’s address – that he would cancel Washington’s participation in the JCPOA if Congress and U.S. allies did not bend to his efforts to effectively renegotiate it – was suggested by none other than John Bolton.

The line was added to Trump’s speech after Bolton, despite Kelly’s recent edict [restricting Bolton’s access to Trump], reached the president by phone on Thursday afternoon from Las Vegas, where Bolton was visiting with Republican megadonor Sheldon Adelson. Bolton urged Trump to include a line in his remarks noting that he reserved the right to scrap the agreement entirely, according to two sources familiar with the conversation.[Emphasis added.]

Bolton’s access to Trump may indeed be restricted, but, if he’s speaking on Adelson’s behalf, that probably makes a difference. Even before his visit to Las Vegas after the mass shooting there last week, Trump took time out to meet with the billionaire casino owner at the White House. The meeting’s purpose was not confined to the expression of condolences, according to Adelson’s spokesman.

Adelson is the former chairman and almost certainly the biggest funder of the Republican Jewish Coalition (RJC), an ultra-hawkish group that includes on its board of directors Trump’s second-biggest campaign donor (after Adelson and his wife, Miriam), Bernard Marcus, as well as other wealthy donors whose worldview largely corresponds to that of Israel’s right-wing Likud Party.

And it bears repeating that Trump himself warned specifically about the RJC and Adelson’s desire to control politicians using campaign contributions.

Sheldon Adelson is looking to give big dollars to Rubio because he feels he can mold him into his perfect little puppet. I agree!

After Trump won the nomination, Adelson emerged as Trump’s biggest campaign supporter. And Adelson reportedly has a narrow set of policies (aside from restricting internet gambling) he seeks to influence through his political contributions.

Newt Gingrich, himself a huge recipient of Adelson’s financial largesse during his failed 2012 presidential campaign, said that Adelson’s “central value” is Israel.

Among his policy priorities are tacit if not explicit U.S. approval of Jewish settlement expansion on the West Bank and Jerusalem; moving the U.S. embassy from Tel Aviv to Jerusalem; and undoing the JCPOA (or, in Israeli Prime Minister Bibi Netanyahu’s words, “fix it or nix it.”)

Adelson must be disappointed by Trump’s failure so far to move the embassy; just last week, he signed a temporary order keeping it in Tel Aviv. Indeed, he may have felt obliged to personally explain that decision to Adelson in their White House meeting. “I want to give [peace talks between the Israeli and Palestinians] a shot before I even think about moving the embassy to Jerusalem,” he said. On the other hand, the casino magnate must be very pleased with the relative silence by the Trump administration over the question of settlement expansion which has proceeded at record rates since he became president.

The Role of Cotton

Trump’s announcement effectively punted the decision to Congress whether to reimpose sanctions or take other actions that would almost certainly put Washington in violation of the agreement negotiated by the Obama administration, European allies, China, Russia and Iran.

Senate hawks, led by Sens. Tom Cotton (R-AR) and Bob Corker (R-TN), have proposed legislation that would institute automatic reinstatement of sanctions if Iran comes within a year of a nuclear weapons capability and eliminates the JCPOA’s sunset clauses, effectively rewriting of the agreement and potentially putting the U.S. in violation of the accord.

(Cotton also received $960,250 in supportive campaign advertising in the last month of his campaign from the Emergency Committee for Israel (ECI), a right-wing group headed by the neoconservative pundit, Bill Kristol, who infamously predicted that the Iraq war would last two months. At its inception, the ECI was based out of the same Washington office as the Committee of the Liberation of Iraq, a pressure group that lobbied for the 2003 invasion.)

Singer, alongside Marcus and Adelson, also funded anti-Iran deal groups such as the Foundation for Defense of Democracies, which played a leading role in opposing any nuclear deal or serious diplomatic engagement with Iran for more than a decade.

Cotton has himself made no secret of his desire to sabotage nuclear diplomacy with Iran. In March 2015, Cotton organized a controversial letter warning “the Leaders of the Islamic Republic of Iran” that the U.S. government might not abide by an agreement made with the Obama administration. At the time, he argued that Congress should work to undermine U.S. negotiators and scuttle talks between the P5+1 (the five permanent members of the UN Security Council plus Germany) that resulted in the JCPOA.

That opposition to diplomacy was still evident this June when Cotton told Politico, “The policy of the United States should be regime change in Iran,” a position that puts into question his sincerity about wanting to “fix” the deal.

Indeed, Trump’s decision to decertify and punt the question about reimposition of sanctions, potentially in violation of the JCPOA, to Congress was welcomed by Iran hawks like Cotton and, presumably, by Adelson, Singer and Marcus.

Unsurprisingly, the RJC applauded  the White House’s announcement in an email immediately after Friday’s speech. It said:

With today’s decision, President Trump is delivering on a major campaign promise, bolstering security for the United States, Israel, and our allies, as well as creating an opportunity to truly curb Iran’s nuclear ambition and find lasting peace in the Middle East.

Adelson and Marcus rarely speak directly about the Iran deal but when they do, they reveal hawkish and apocalyptic views about how the U.S. should handle relations with Iran and the nature of the Iranian people. Adelson proposed exploding a nuclear bomb “in the Iranian desert” in 2013 as warning of what would happen to Tehran itself if it didn’t abandon its nuclear program. As for Marcus, “I think that Iran is the devil,” he said in a 2015 Fox Business interview.

It seems Trump may be more inclined to listen to them on Iran policy than to his most experienced national security officials.