The appointment of John Bolton as US national security adviser by the US president Donald Trump opened an opportunity for journalists and analysts to loom light on Bolton’s notorious connections with the Mujahedin Khalq Organization (the MKO/ MEK/ PMOI/ the Cult of Rajavi). Many reports and articles were eventually published in the American media to warn about the MKO’s threat for the US foreign policy following the appointment of Bolton since as he is a long standing supporter of the formerly-terrorist designated group, the MKO. 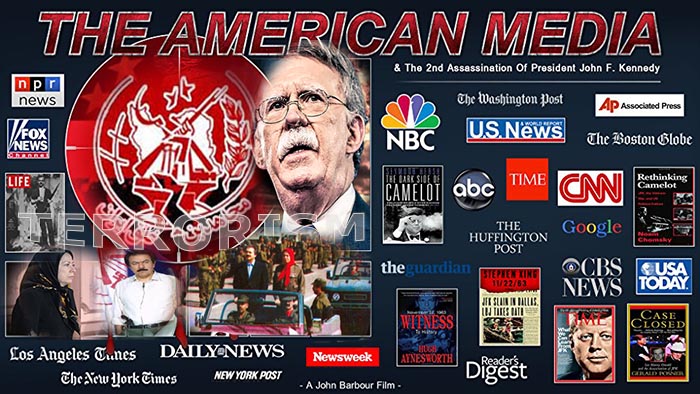 The analysis included five aspects of the MKO’s nature:

Daniel Larison of the American Conservative, a long standing critic of the MKO, posted several articles on the MKO-Bolton ties in the magazine. “The MEK may not be on the U.S. list of foreign terrorist organizations any longer, but it is still a disreputable and despicable group”, he writes. “It is considered a totalitarian cult for good reason.”

Jason Rezaian explains why the MKO is considered a cult: “But it is the group’s activities in the decades since that have cemented its reputation as a deranged cult. For decades its command center was a compound in Iraq’s Diyala province, where more than 3,000 members lived in virtual captivity. The few who were able to escape told of being cut off from their loved ones, forced into arranged marriages, brainwashed, sexually abused and tortured.

“All this was carried out under the supervision of the group’s leaders, Massoud and Maryam Rajavi, the husband and wife at the top of the organization’s pyramid.”

“MEK are Terrorists, Even According to Their US Sponsors”, wrote Tony Cartalucci at the New Eastern Outlook. “Despite claims by a growing army of MEK advocates spanning various social media platforms, MEK is without doubt a dangerous terrorist organization. Even those seeking to sponsor MEK as a militant proxy against Iran have admitted as much.”

“With today’s actions, the Department does not overlook or forget the MEK’s past acts of terrorism, including its involvement in the killing of U.S. citizens in Iran in the 1970s and an attack on U.S. soil in 1992. The Department also has serious concerns about the MEK as an organization, particularly with regard to allegations of abuse committed against its own members.”

Larison cites from Elizabeth Rubin the prominent journalist of the New York Times Magazine who was the first to call the MKO as “the Cult of Rajavi” in an article titled the same in June 2003. Rubin had also written about the MKO and its “American fan club” back in 2011:

As a senior State Department official told me, “They are the best financed and organized, but they are so despised inside Iran that they have no traction.” Iranian democracy activists say the group, if it had had the chance, could have become the Khmer Rouge of Iran.

“They areconsidered traitors and killers of Iranian kids,” said the official, who spoke on the condition of anonymity because the Mujahedeen Khalq’s status on the terrorist list is under review.

Jason Rezaian comments on Bolton’s enthusiasm for the Mujahideen-e Khalq (MEK) and what it means for U.S. Iran policy:

“The MEK is the type of fringe group that sets up camp across the street from 1600 Pennsylvania Avenue and hands out fliers filled with unsubstantiated claims. This is America— we let crazy people talk. That’s their right, and I would never suggest that they be prohibited from doing that. But giving the MEK a voice in the White House is a terrible idea.”

Larison warns about the penetration of MKO’s propaganda machine in the US policy after Bolton takes the position. “Now that Bolton is in such an influential position in the Trump administration, his connection with and support for the MEK pose some real dangers for the U.S. He could use his position to funnel misinformation from the MEK to the president to distort U.S. policy in their favor,” he says.

Approximately all the journalists share the idea that the MKO is very unpopular in Iran. “It is a measure of how terrible his judgment is and how fanatical his desire for regime change in Iran is that he has become are liable booster of a group that most Iranians despise,” writes Larison.

Jason Rezaian also states, ”The group is loathed by most Iranians, mainly for the traitorous act of fighting alongside the enemy.”

“The group was long a fixture on the State Department’s list of terrorist organizations for having killed American citizens,” he writes. “Bolton and others successfully lobbied to have the designation removed in2012. That did little to change how average Iranians think of the organization.”

He recounts his own authentic experience of living in Iran: “In the seven years I lived in Iran, many people expressed criticism of the ruling establishment — at great potential risk to themselves. Some hoped for regime change by military force, others dreamed of a return of the monarchy and many more wanted to see a peaceful transition to a secular alternative to clerical rule. In all that time, though, I never met a person who thought the MEK should, or could, present a viable alternative.”

The MKO’s well paid lobbying campaign in the US Congress and administration has been always discussed as a crucial issue of Hypocrisy in the US government. The lobby had been active even during the time the group was in the Foreign Terrorist list of the State Department. Cartalucci criticizes the  MKO’s lobby, “Worst of all, the terrorist organization Bolton lobbied for was literally listed on the US State Department’s Foreign Terrorist Organizations list during his lobbying activities – in direct violation of US counter-terrorism laws.”

“There has been a shameful parade of former U.S. officials, retired military officers, and has-been politicians making their annual pilgrimage to pay tribute to Maryam Rajavi in Paris every year,” Daniel Larison writes. “Bolton has been a faithful devotee for the last decade, and when he was just a former Bush administration official few people cared that he was disgracing himself with his appearances there.”