Mujahideen-e Khalq (MEK) is a notorious cult-like group of Iranian exiles which appears to have close to literally zero support inside Iran but has for years cultivated significant ties to DC Iran “regime change” advocates as well as a bipartisan list of shills willing to take their money (of which they have quite a lot).

It’s an odd group which mixes Islam, Marxism and neocon-inflected DC Pay-to-Play values into a bizarre amalgam run by current cult leader Maryam Rajavi. Until just a few years ago the US State Department listed them as a terrorist organization. They appear to be mainly out of the terrorism business now. But they’re still a treacherous and dangerous group. With all this you’ll be glad to learn that one of their biggest backers is none other than Trump National Security Advisor John Bolton. And perhaps they’re most high profile and ardent supporter (and recipient of their cash) is Rudy Giuliani.

I just found out this afternoon that back in March of this year Rudy traveled to Tirana, Albania to headline a major MEK event. Here you can see him with Rajavi in a North Korea-like pose at the event in Tirana.

Needless to say, Rudy’s close ties to President Trump were played up aggressively.

Here’s Rudy at the Tirana event leading a “regime change” chant after promising the group that John Bolton remains loyal to them and that “you need to be in charge in [Iran].” It’s nuts.

Did Rudy get paid for this speech, like he has in other cases? How much? 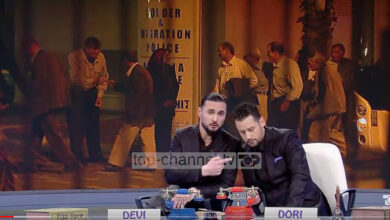 Testimony of three Mojahedin: The truth about the MEK

US already at war with Iran