His work for a member of a pro-Russian political party is drawing scrutiny.

Senate Democrats have asked the Justice Department to investigate whether Rudy Giuliani, President Trump’s personal lawyer, is violating the Foreign Agents Registration Act by lobbying for foreign interests without registering with the agency.

Seven Democrats wrote Thursday to John Demers, assistant attorney general for the department’s national security division, following news that Giuliani sent a letter in August to Romania’s president attacking an anti-corruption campaign there. Giuliani has acknowledged he was paid to send the letter by a firm run by former FBI director Louis Freeh, who represents one or more wealthy Romanians investigated under the campaign. (Freeh is not registered as a foreign agent.) The former New York mayor’s letter, which contradicts official US policy and drew a rebuke from the State Department, drew attention to what the Democratic senators describe as Giuliani’s “numerous foreign clients and ongoing communications with senior U.S. government officials,” including President Trump. Giuliani has not ended his work for foreign governments, nor has he fully disclosed his client list, even as he advises the president.

The senators note that Giuliani also lobbied to help the Mujahedin-e-Khalq, an Iranian opposition group, win removal from a State Department’s list of foreign terrorist organizations, and has advocated for regime change in Iran, one of the group’s top goals. His recent clients include the government of Qatar, which is aggressively working to influence Trump, and he has referenced unnamed clients in Colombia and Brazil. Giuliani’s firm, Giuliani Security & Safety, has touted work for governments in Serbia, Ukraine, Chile, Dominica, Uruguay, the Dominican Republic, and El Salvador. Neither the firm nor any of its employees has registered under with the Justice Department. The firm did not respond to requests for comment.

The senators’ letter says Giuliani’s work for the city of Kharkiv, Ukraine, whose mayor is a member of Ukraine’s Party of Regions, is especially concerning. That party, known for a pro-Russia stance, is the organization that employed former Trump campaign chairman Paul Manafort as an advisor and lobbyist between 2006 and 2014. Manafort, convicted last month of tax fraud in connection with that work, and for bank fraud, faces another trial later this month for charges that include failing to register as a lobbyist for the party.

Giuliani has said he does not believe he is required to register with the Justice Department as a foreign agent because he does not directly lobby Trump or the US government. But the FARA law generally requires anyone attempting to influence US policy on behalf of a foreign entity to register with the Justice Department regardless of whether they lobby directly. The senators urged Demers to scrutinize Giuliani’s claims that he does not advocate for clients in private communications with Trump and top White House aides. “Without further review, it is impossible to know whether Mr. Giuliani is lobbying U.S. government officials on behalf of his foreign clients,” they write. 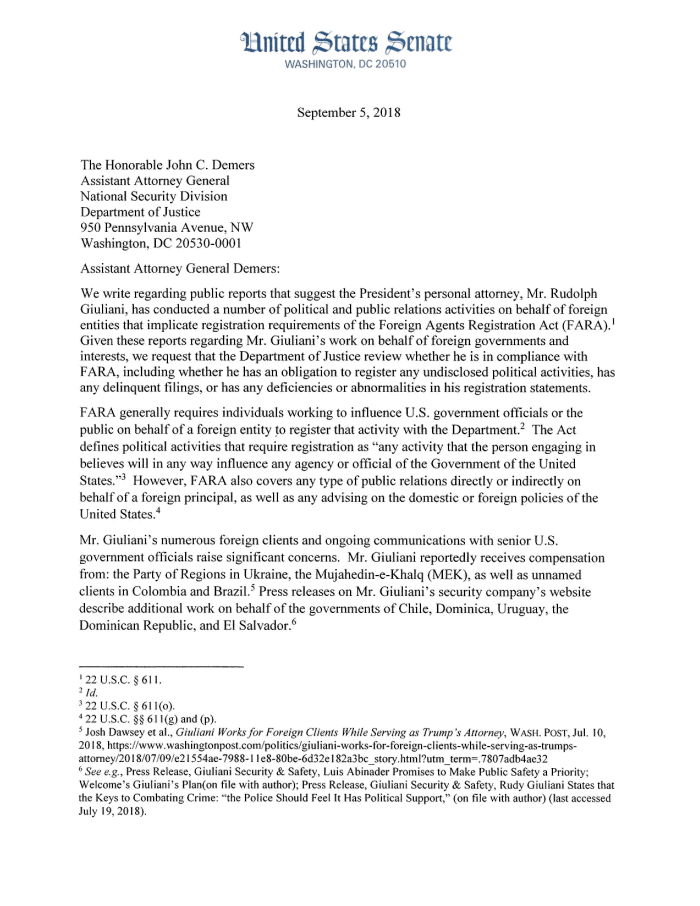 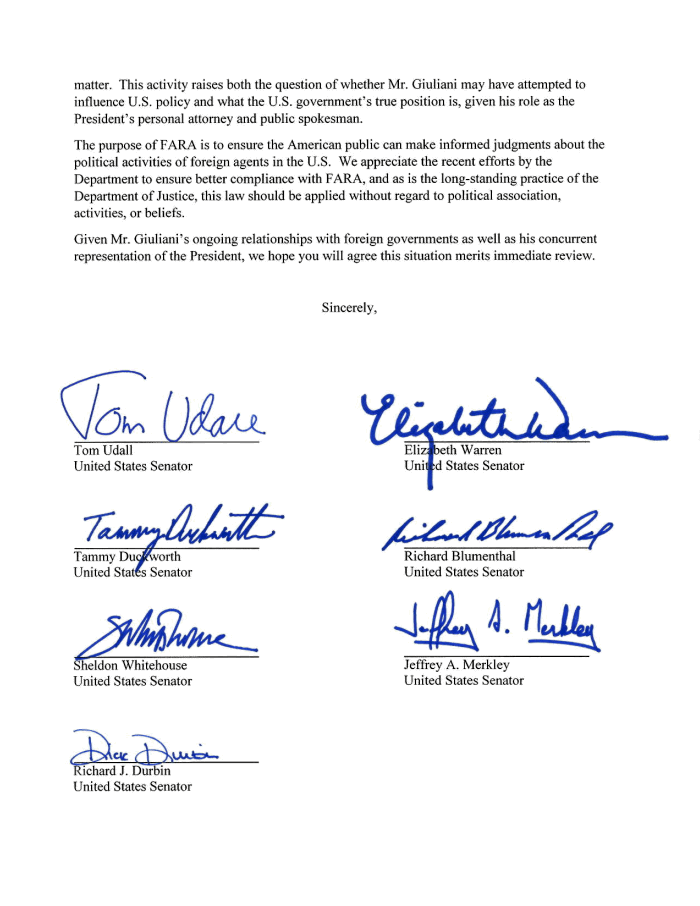 Mother Jones was founded as a nonprofit in 1976 because we knew corporations and the wealthy wouldn’t fund the type of hard-hitting journalism we set out to do.

Today, reader support makes up about two-thirds of our budget, allows us to dig deep on stories that matter, and lets us keep our reporting free for everyone. If you value what you get from Mother Jones, please join us with a tax-deductible donation so we can keep on doing the type of journalism that 2018 demands.

Dan Friedman is a reporter in Mother Jones‘ DC bureau. Reach him at [email protected].