Gingrich considered registering as a lobbyist for Iran regime change

The former House speaker sought advice late last year on whether to register as a foreign agent for the Iranian opposition. 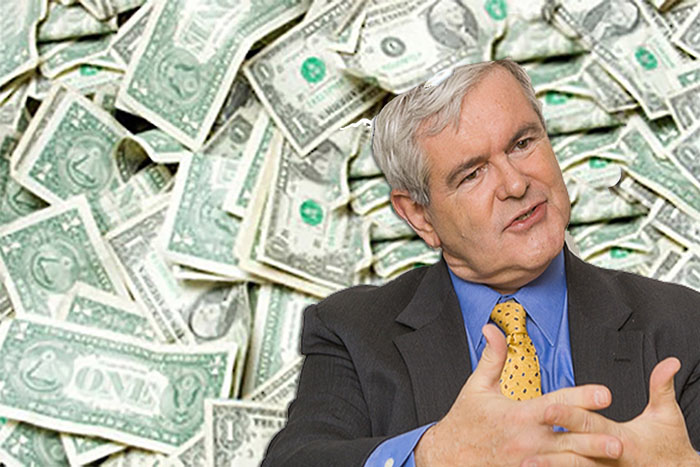 Former Speaker of the House Newt Gingrich attends the”Free Iran 2018 — the Alternative”event organized by the National Council of Resistance of Iran, an exiled Iranian opposition group, on June 30, 2018, in Villepinte, north of Paris.
Former US House speaker and Donald Trump ally Newt Gingrich asked the Justice Department for advice last year on whether he should register as a foreign agent amid deepening involvement with groups seeking regime change in Iran.
Gingrich asked the department in mid-September whether he should register under the Foreign Agents Registration Act (FARA) after an undisclosed person asked him to urge a foreign ambassador in Washington to seek funding from that ambassador’s country to “promote democracy” in Iran. Gingrich declined to respond to Al-Monitor’s requests for comment and it’s not clear if he ever went through with the person’s request.
The request is spelled out in an Oct. 19 advisory opinion posted to the FARA web site. While Gingrich isn’t named in the redacted document, descriptive details are a perfect match for his Virginia-based Gingrich Productions firm (Al-Monitor was able to independently confirm the request came from Gingrich).
In his letter to the Justice Department, Gingrich also seeks guidance on whether he should register as a lobbyist for a “foreign political party” after making “a number” of “paid appearances” sponsored by the group’s US affiliate both inside and outside the United States. While the foreign party isn’t named, it appears to be a clear reference to the pro-regime change National Council of Resistance of Iran (NCRI-US); Gingrich has attended the group’s annual gathering just outside of Paris several times.
In its advisory opinion, the Justice Department says Gingrich, who has not registered as a foreign agent, may need to do so if the US affiliate “is acting in any way on behalf of” the parent party. Interestingly, the NCRI’s US office itself has been registered under FARA as a foreign agent of the NCRI since 2012. A spokesman for the group said it had nothing to do with Gingrich’s potential outreach to the unnamed foreign ambassador.
Gingrich was an adviser to Trump’s 2016 presidential campaign and remains close to the president, who sought his advice on how to avoid a Democratic “blue wave” ahead of the 2018 mid-term elections. His wife, Callista Gingrich, was tapped as ambassador to the Vatican in May 2017.
But he isn’t the only Washington insider in the president’s orbit who’s close to the Iranian opposition. Trump lawyer Rudy Giuliani has also long been a fixture at NCRI events. And Al-Monitor first reported that national security adviser John Bolton had disclosed being paid $40,000 for his appearance at the group’s rally in France in 2017 before he joined the government.
Gingrich’s stepped-up political activity on behalf of the Iranian opposition is particularly noteworthy as the Donald Trump administration sponsors a Middle East conference in Poland this week that was originally billed as an anti-Tehran summit. Giuliani is slated to appear at an NCRI rally in Warsaw coinciding with the summit.
Julian Pecquet , Al-Monitor
Julian Pecquet is Al-Monitor’s Washington Editor. He was previously Congressional Correspondent from 2014 through May 2017 and most recently before that headed up The Hill’s Global Affairs blog. On Twitter: @JPecquet_ALM, Email: jpecquet@al-monitor.com.

As Giuliani Calls for Regime Change in Iran, Netanyahu Raises the Specter of “War”