When protests broke out in Iran at the end of 2017, most countries maintained a hands-off approach. After all, these countries maintain diplomatic and trade relations with the Iranian government. Even some influential U.S. observers recommended caution. Former Secretary of State John Kerry, for instance, tweeted: “With humility about how little we know about what’s happening inside Iran, this much is clear: it’s an Iranian moment and not anyone else’s. But the rights of people to protest peacefully and voice their aspirations are universal and governments everywhere should respect that.” 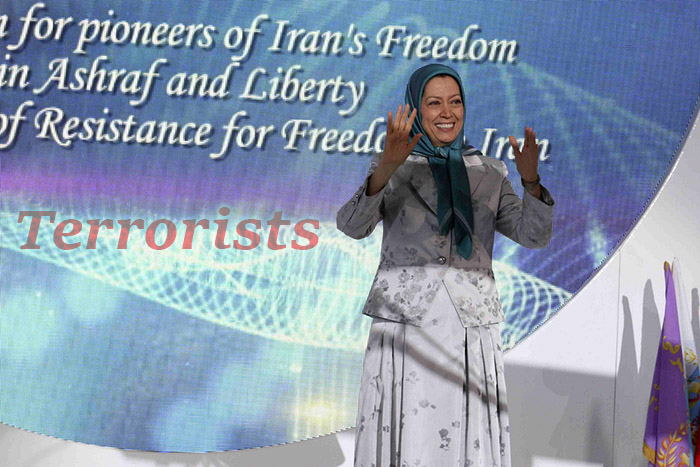 But other American observers, eager to exploit the protests for their own purposes of promoting regime change in Iran, quickly rushed in where the more cautious feared to tread. The first push came from the media. Lacking any organizations or opposition leaders to interview inside Iran, some American media substituted Iranian exiles as representatives of the people. Mohammad Reza Pahlavi’s Monarchists got some coverage.

But it was Maryam Rajavi, leader of the notorious Mojahedin-e Khalq (MEK), who received the most coverage, appearing by video link on Fox News and Voice of America.

The MEK is a fringe, cult-like group that was once on the U.S. terrorism list. Rajavi’s appearances, in which she talks as though she represented the Iranian people, provided Iran’s leaders with a gift. Among other angry Farsi commentary, she provoked a hashtag storm on Twitter, with Iranians of every political stripe telling Rajavi in English and Farsi to #shutuprajavi. It is hard to overstate how much Iranians both inside and outside the country hate the MEK.

Indeed, the Iranian media immediately translated Maryam Rajavi and the MEK’s social media output and video speeches into Farsi to inform all Iran’s citizens how the US was hoping to impose the MEK on the country through regime change. Some Iranians might want regime change but what comes after is just as important. No Iranian wants the MEK to substitute for the mullahs.

Later, what had begun as working-class protests against economic hardship and government corruption were quickly politicized by agitators who instigated violence. Iran’s Spiritual Leader Ayatollah Khamenei attributed these incidents of violence to “foreign interference,” naming America, Israel, Saudi Arabia, and their proxy, the MEK. Major General Mohammad Ali Jafari, commander of the Islamic Revolution Guards Corps (IRGC), announced that the MEK trained a number of people involved in the violence. Iran’s intelligence service in the western Iranian province of Lorestan also said it had disbanded and arrested four members of a terrorist cell linked to the MEK in Boroujerd. Iran also claimed to have uncovered a network of agitators organized from Afghanistan and Iraqi Kurdistan that planned to launch violent actions later in 2018. The spontaneous and widespread working-class protests had apparently triggered the network into action ahead of schedule.

If the plan had been to provoke Iran’s security services into a harsh crackdown on the protesters, which the Western media could then present as human rights violations, it largely didn’t work. Instead, the establishment brought out its supporters in big counter-demonstrations. Above all, when the protests turned violent, ordinary people went home. They wanted no part in manufactured regime change. Iran’s hardliners know that the most effective way to denounce the protests without resorting to bans or violence is to blame the MEK. This allows them to spin their suppressive activities to the populace as counter-terrorism.

Iranians are not surprised by the involvement of the MEK in violence. They know the group and its history. A visitor to any war museum in Iran will find a section dedicated to the MEK’s military collaboration with Saddam Hussein. New Iranian films and TV docudramas educate a new generation about the MEK terrorism, which caused thousands of civilian deaths.

Nevertheless, the MEK’s backers have worked for years to whitewash the group’s past crimes for a Western audience. For anti-Iran elements in the United States, the MEK has been a useful tool by leaking faked information during the nuclear negotiations and posing as human rights advocates. This carefully constructed narrative of victimhood and supposedly democratic values has allowed the MEK to operate in political circles where they could push the regime change agenda.

Meanwhile, in Albania, the MEK was busy secretly reconstructing the terrorist training camp it had lost in Iraq. When former Secretary of State Hillary Clinton negotiated an agreement to transfer 3,000 MEK fighters from Iraq to Albania, funding was earmarked to establish an Institute for De-Radicalisation so that the MEK could be successfully rehabilitated back into society. That didn’t happen. In this past year, Senator John McCain (R-AZ) and former UN ambassador John Bolton both visited Albania to promote the MEK and its regime-change agenda.

These and other MEK activities have driven a wedge between Europe and the Trump administration. Even before the protests, European parliamentarians had demanded a ban on the MEK, particularly after an incident of MEK violence on parliamentary premises. Relations between France and Iran now make it possible for Iranian President Hassan Rouhani to directly demand that France curtail the MEK’s activities there.

In an attempt to maneuver her way out of this isolation and irrelevance, Maryam Rajavi recently published an article in the Wall Street Journal as though none of this had happened. It is just one more attempt by the MEK to portray itself as an influential representative of the Iranian people. But if the MEK had even one iota of influence inside Iran, the protests would have become much more violent. Instead, all the MEK seems to have accomplished is to provide Iran’s hardliners with a convenient rationale for suppressing an authentic civic movement for change.

Massoud Khodabandeh is the director of Middle East Strategy Consultants and has worked long-term with the authorities in Iraq to bring about a peaceful solution to the impasse at Camp Liberty and help rescue other victims of the Mojahedin-e Khalq cult. Among other publications, he co-authored the book “The Life of Camp Ashraf: Victims of Many Masters” with his wife Anne Singleton. They also published an academic paper on the MEK’s use of the Internet. Anne Khodabandeh is a UK expert in anti-terrorist activities and a long-standing activist in the field of deradicalization of extremists. She has written several articles and books on this subject, along with her husband, who is of Iranian origin. Photo: Maryam Rajavi (jalal4liberty via Flickr)

by Anne and Massoud Khodabandeh