While the hard-hit Iranian economy is likely to continue reeling, driving more protesters into the streets, one shouldn’t mistake their pain for a desire to subject themselves to a totalitarian cult with hardly a fraction of the support enjoyed by the Shia clergy helming the Islamic Republic.

WASHINGTON — Iran’s latest wave of protests against the suffering state of the economy and the plunging value of the rial appeared to have come and gone by Wednesday, as crowds dissipated and businesses opened up shop following a two-day strike. While clashes between security forces and protesters during the protests were far from widespread, the very fact that the protests broke out hints at the extreme duress Iran is undergoing thanks to President Donald Trump’s renewed economic war on the country.

Judging by the enthusiastic response to the demonstrations in the U.S., Saudi, and Israeli press, anti-Iranian forces are clearly banking on the possibility that the sanctions that will soon be reimposed in the next several months could dislodge the Islamic Republic, clearing the way for a regime friendly to the West.

Thus we have witnessed anti-Iran publications like the Israeli Jerusalem Post frothing over with excitement over scenes of alleged Iranian citizens chanting “Death to Palestine,” “Let go of Syria – think about us,” ..

While videos from Iran depict what could very well be an organic groundswell of social protest against government policies, photos published in papers like the Post show a different story: middle-aged Persian men gripping English-language signs and the flags of the toppled Iranian monarchy, along placards bearing the portrait of an unlikely figure: the moustached, mysterious and long-disappeared charismatic cult leader who is considered an outlawed terrorist and traitor to the nation — Massoud Rajavi. 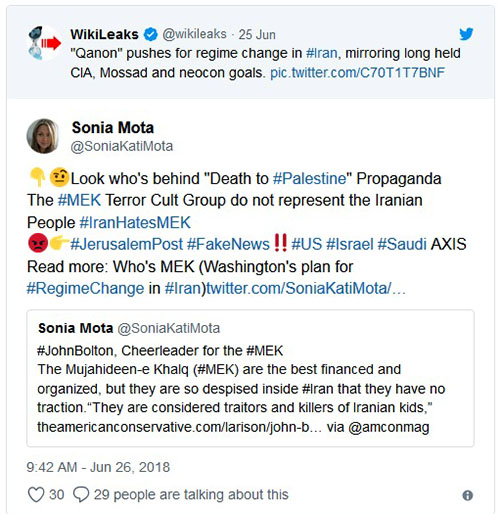 Rajavi was the leader of the group that lies at the center of the anti-Iran alliance’s “regime change” dreams: Mujahedin-e Khalq (MEK), or the People’s Mojahedin Organization of Iran (PMOI). A fanatical militant group whose title translates literally to the “The People’s Holy Warriors,” this eccentric left-nationalist, pseudo-religious cult has been led by Massoud’s wife, Maryam Rajavi, since the 1980s.

Formed in 1965, the group’s tortured history has seen it transformed from a movement of communist-influenced, Islamist-tinged anti-imperialists who carried out attacks on U.S. military officers in Iran into an authoritarian de facto mercenary army serving anyone opposed to the Islamic Republic – be it Saddam Hussein’s Iraq, Israel, or the United States. 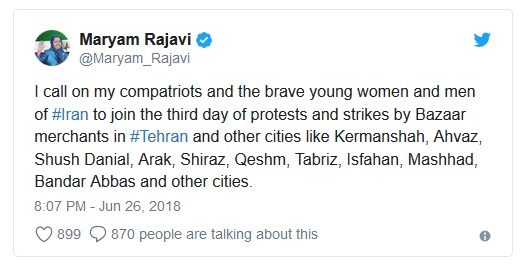 The group wields major PR clout and outsized influence in Western capitals through countless front groups like the National Council of Resistance in Iran (NCRI), through which it depicts itself as “a political coalition that represents all of Iran’s religious, ethnic, and political groups proportionately;” stresses feminist, Islamist, free-speech and pro-free-market values; and is firmly “committed to a secular, democratic, non-nuclear republic” in Iran.

The RAND Corporation described the group as “skilled manipulators of public opinion,” but a cursory look at its publications shows a rather ham-fisted and self-celebratory pile of cultish jargon. Throughout the past week, publications like Iran Focus or Iran News Update – the latter of which bills itself as “Insider News & Analysis in Iran” – have pumped out articles boosting NCRI as “the only viable alternative to the Iranian regime” and claiming:

As protests in Iran continue to multiply and intensify, the regime’s claim to power is looking more and more tenuous. If the people were to overthrow their tyrannical government, the only democratic organization in the position to take over governance would be the NCRI … The regime’s reign of terror is at its close.”

The MEK was one of the first groups to be named a Foreign Terrorist Organization by the U.S. State Department, but its extreme opposition to the Islamic Republic of Iran and generous donations to politicians has led to its eventual delisting. The roster of politicians and influential figures tied to the MEK and its fronts spans much of the U.S. political spectrum, from the far right to the left-of-center.

Trump’s White House is a virtual all-star cast of MEK associates – explaining the administration’s frenzied push to scrap the nuclear deal and push to topple Tehran. Among the top supporters of MEK is White House National Security Advisor John Bolton, whose hatred of Iran’s government verges on the pathological.

Bolton is positively predisposed to the MEK …  they will have some access to this White House, [to say] the least.”

The MEK once enjoyed a decently-sized support base within Iran and even played a role in the 1979 Iranian Revolution that overthrew U.S.-loyal Shah Reza Pahlevi and opened up a new period of national independence for the nation. Following the revolution, the group’s political struggles with the faction led by Ayatollah Ruhollah Khomeini and failure to secure widespread support led it to deploy its Shah-era “armed struggle,” or terrorist tactics, against officials and clergy loyal to [Ayatollah] Khomeini, claiming the lives of dozens of key figures in the newly-formed government.

The Mojahedin (jihadists), whom the Islamic Revolution’s leader regularly derided as monafeghin (hypocrites) – an allusion to those in the Quran who conspired against the Prophet while feigning loyalty – became the top enemies of the Islamic Republic.

Faced with the full brunt of the Islamic Republic’s retribution, the group fled to Iraq in the 1980s and became a virtual “Iranian Legion” for Saddam Hussein, who equipped the group with heavy armor, uniforms, and artillery so that it could fight alongside Iraqi forces during the Iran-Iraq war. Following the war, the self-styled “national liberation army” launched a series of cross-border raids against Iranian civilian and military targets, sacrificing nearly all of its remaining support among Iranians.

The drop in Iranian support led to a push to replenish MEK ranks by targeting family members, wealthy potential donors, and expatriate Iranians in Turkey and the United Arab Emirates. True to their form as a cult, the group promised to connect prospective recruits with a lifeline of assistance as the trade-off for their enlisting in the group.

According to the RAND Corporation:

Many were enticed not with promises of an opportunity to fight the IRI, but rather through promises of paid employment as translators, assistance in processing asylum requests, free visits to family members, public-health volunteer opportunities, and even marriage. All ‘recruits’ were brought into Iraq illegally and then required to hand over their identity documents for ‘safekeeping,’ effectively trapping them at MeK compounds. These findings suggest that many MeK recruits since 1986 were not true volunteers and have been kept at MeK camps in Iraq under duress.”

Tens of thousands of the group’s members remained under the protection of the Iraqi dictator, even participating in the bloody massacres that followed the Shia Arab and Kurdish uprisings of 1991, until the fall of the Ba’athist regime in 2003 when the U.S.-led coalition bombed the Saddam loyalists’ camps.

Seeing continued use for the MEK for their own anti-Iran efforts, however, the U.S. placed 3,800 members of the group under protective custody at Camp Ashraf, the sprawling city-sized base built for them by Saddam. Those who escaped the group had to undergo cult deprogramming.

According to RAND, the group – which claims to uphold women’s equality – ensured that lines were “painted down the middle of hallways separating them into men’s and women’s sides” at the camp, prior to their expulsion by Iraqi forces in 2013. Many were shipped by the U.S. to Albania, the only country willing to accept them.

Yet while a major portion of the group’s membership spent over three decades imprisoned in Ba’athist Iraqi camps near the border with Iran, a significant chunk of the group – such as leader Maryam Rajavi – nestled into the Iranian expatriate communities in Paris, Washington, and other capitals. The group spent decades relentlessly lobbying Western governments and lawmakers to support its attempts to bring “reform” to Iran, and has even furnished intelligence to U.S. and Israeli intelligence agencies in hopes to provide a casus belli for hostile policies and even military actions versus Tehran.

The “Iranian Resistance” wags the dog in Washington

In the U.S. capital, the group was enormously successful in its efforts to recruit an auxiliary brigade of highly influential top politicians to its cause. Even the far-right Washington Times, owned at the time by charismatic cult leader Reverend Sun Myung-Moon, issued glossy “special report” inserts hailing the militaristic group as the bringers of “freedom” to Iran. The publication included words of praise from Rep. John Lewis (D-GA), House Minority Leader Nancy Pelosi (D-CA), the late Saudi Prince Turki bin Faisal al-Saud, and Sen. John McCain (R-AZ), among many, many, others.

A brief list of these MEK supporters in the Republican Party reads like a who’s-who of anti-Iran officials from the neoconservative administrations of Presidents George W. Bush and Donald Trump:

And then we have the top luminaries from President Donald Trump’s circle, including:

The ayatollah must go! Gone! Out! No more! I will not support anyone for president of the United States who isn’t clear on that slogan behind me. What does it say? It says regime change!”

And then, of course, there’s John Bolton, a ravening ultra-hawk with a nearly obsessive hatred of the Islamic Republic of Iran.

I suspect Bolton’s interactions with the MEK were above all motivated by financial interests … The MEK may be a backward cult with little to offer, but they are the enemy of his enemy. And they pay handsomely.”

The same can likely be said about the rest of the elected “representatives”-for-hire in Washington, whose belief in the MEK’s ability to lead a post-IRI Iranian state is no doubt on par with their trust in the late Rev. Moon’s claims to be the one and only messiah.

While the hard-hit Iranian economy is likely to continue reeling, driving more protesters into the streets, one shouldn’t mistake their social demands or financial pain for a desire to subject themselves to a totalitarian cult with hardly a fraction of the support enjoyed by the Shia clergy helming the Islamic Republic — no matter the extent to which Washington and the Saudis attempt to foist the Rajavi group on the Iranian nation.

Yet despite the group’s dearth of political legitimacy, the congressional aide who spoke to FP understands why they remain a mainstay in the U.S. Capitol:

Elliott Gabriel is a former staff writer for teleSUR English and a MintPress News contributor based in Quito, Ecuador. He has taken extensive part in advocacy and organizing in the pro-labor, migrant justice and police accountability movements of Southern California and the state’s Central Coast.

Stories published in our Daily Digests section are chosen based on the interest of our readers. They are republished from a number of sources, and are not produced by MintPress News. The views expressed in these articles are the author’s own and do not necessarily reflect MintPress News editorial policy.