US State Department: The MEK cannot stand for leadership in the Islamic Republic

Mojahedin-e Khalq (MEK): there is more behind the demand for respect for human rights in Iran

In Ashraf-3 – this is the name of the new Iranian Resistance Headquarters in Albania – Rudy Giuliani, Councilor for Information Security of the White House, has supported the MEK as a “valid alternative to the regime of terror which has oppressed the “Iran” and called Maryam Tajavi “the only true representative of the Iranian people” .
About 50 kilometers from Tirana, Ashraf-3 resembles a heavily guarded small town, with parks, conference rooms, restaurants and swimming pools. It is “the new epicenter of the Iranian resistance, which shows its power as the world loses patience with Iran”, comments Ali Safavi, a member of the National Council of Resistance of Iran (NCRI). The conference, entitled “120 years of struggle of the Iranian people for freedom”, held on 12 and 13 July, was attended by thousands of MEK members and around 300 politicians from all over the world. Among others, Ingrid Betancourt, former Colombian senator and presidential candidate, Michèle Alliot-Marie, a former French minister, defined by Forbes in 2006 as the 57th most powerful woman in the world, Joe Lieberman, a former US senator and first American Jewish candidate Vice President, former Clinton energy secretary, Bill Richardson, Matthew Offord, Conservative Member of the Parliament of the United Kingdom, Sid Ahmed Ghozali, former Algerian Prime Minister, former French Foreign Minister Bernard Kouchner, former Prime Minister Canadian Stephen Harper. Italy was represented by Roberto Rampi, senator of the Democratic Party, Giuseppina Occhionero, elected deputy in the ranks of LEU, Antonio Tasso, M5S deputy. Explicit objective of the assembly: to ask the international community to put an end to the pacification policy with Iran.

The Mojahedin-e Khalq (MEK) in fact claim to have the support of the majority of Iranians but this time it is the American Herald Tribune that denies the organization. According to a poll commissioned in 2018 by the Public Affairs Alliance of Iranian Americans (PAIA) only 6% of Iranians residing in the United States support the MEK as a legitimate alternative to the current government in Iran. The figure reflects the analysis of the previous year, which reports a weak 7% on sympathies for Maryam Rajavi, leader of the MEK.

As previously written , the Mujaheddin e-Khalq were born in 1963, in Iran, with the aim of opposing Western influence in the country and as bitter opponents of the Shah regime. In 1979 the Mek participated in the[Ayatollah] Khomeini-led revolution, but the ideology that characterized it at the time was a singular cross between Marxism, feminism and Islam. As such it is completely incompatible with that of the Shia ayatollahs. Thus the Mek was forced to disperse, while its headquarters moved to Paris in 1981. In this time the MEK “changed skin”, as well as ideologues and financiers and, five years later, reappeared in Iraq, precisely in Camp Ashraf, north of Baghdad. There he distinguished himself as an autonomous armed formation – a few thousand well-trained fighters, with families in tow – who supported Saddam Hussein against Iran and actively appeared in numerous episodes of the repression of Iraqi Kurds. The MEK strangely survived the fall of Saddam Hussein and, in 2003, was transferred, by the American winners, literally “arms and baggage”, to another large military camp that will take, not surprisingly, the name of Camp Liberty. From that outpost, numerous terrorist attacks and diversion and boycott actions against Iran are raging. Formally “disarmed” by the US military, included in the list of international terrorist organizations, the MEK continued to carry out an intense war and propaganda campaign against Tehran. Always under the guidance of the Paris Headquarters and always left free to act by the American, Israeli and French secret services.

The ambiguity of its location does not prevent it – indeed it helps it – from cashing in on the more or less explicit support of Western political exponents, such as the former mayor of New York, Rudolph Giuliani, and John Bolton, former US representative at the Nations United and current National Security Advisor.

Even former European commissioner Emma Bonino faces some of the MEK’s “humanitarian” initiatives. In the New York Times , a list of supporters appeared in 2012, including several members of the American Congress, but also R. James Woolsey and Porter J. Goss, former directors of the CIA, Louis J. Freeh, former director of the FBI, Tom Ridge, former secretary of Homeland Security under President George W. Bush, former Attorney General Michael B. Mukasey, and former Obama National Security Advisor, General James L. Jones.
However, as early as 1994, the US State Department emphasized that the MEK could not stand for leadership in the Islamic Republic:

“Avoided by most Iranians and fundamentally undemocratic, the organization of the Mojahedin-e Khalq is not an alternative practicable to the current Iranian government “.

Earlier, in 1992, the then Deputy Secretary of State, Robert Pelletreau, wrote

: “The Mojahedin-e Khalq Organization does not represent a significant political force among the Iranians, partly because of its close ties with the Iraqi government “.

The United States included the MEK in the list of foreign terrorist organizations in 1997 for “occasional use of terrorist violence”. In 2012, at the culmination of a bipartisan, aggressive and well-funded lobbying campaign, the then Secretary of State, Hillary Clinton, cleared the MEK, removing it from the “black list”, despite the organization being considered a terrorist not only by Iran and Iraq, but also from the European Union, Great Britain and Canada *.
No effect came from the letter , published in the Financial Times in 2011, of 37 experts from the Islamic Republic. These, underlining the absence of “political base and true support” of the organization within Iran, warned the State Department to exclude the MEK from the black list. Among the signatories of the letter, Gary Sick, who served on the staff of the National Security Council at the time of Presidents Ford, Carter and Reagan, and who on that occasion described the MEK’s support in Iran as “very, very limited”. While Michael Rubin, the Pentagon’s Middle East consultant from 2002 to 2004, wrote in The National Interest that

“much of the Iranian population, regardless of its political vision, shares a deep hatred of the MEK”.

the majority of the Iranian people “are not fooled by the democratic demands of the MEK because they know its murderous history”.

While politicians in the West, according to Politico , would be very sensitive to the scent of money that the MEK would distribute generously (over $ 20,000 to attend an event), even in Europe. So much so that, following in the wake of the sweet effluvium, El País would have discovered that the Vox party would be born thanks to MEK funding, which between 2013 and 2014 would have touched a million euros.

However, whatever the origin of the money of which the MEK seems to abound, at the top of international politics, perhaps, what was claimed by Trita Parsi, president of the National Iranian American Council (NIAC), does not go unnoticed:

“Unlike other opposition groups Iranian, the MEK can organize military operations. Its members are experts in sabotage, murder and terrorism. These are not qualities that lend themselves to any “democratization” project, but they are extremely useful when the strategic objective is to provoke a change of regime (through the invasion or political destabilization) “.

—-
* According to research conducted by Ivan Kesić – a freelance writer for The Iranian – and reported by global Research, the MEK would be a terrorist organization that would conduct attacks against numerous Western targets, both in Europe, North America and elsewhere. In the early 1970s, MEK members killed several US soldiers and civilians working on defense projects in Tehran. In 1972 the MEK would also attempt to assassinate the president of the United States, Richard Nixon. At the same time, the MEK’s agents were also responsible for attacks against structures of Pan-Am Airlines, Pan-American Oil and Shell Oil.
Furlan Margherita
Margherita Furlan, independent journalist, co-founder of pandoratv.it. Committed to unmasking the lies and propaganda of the mainstream media, she deals with domestic and foreign politics, with an eye to the Middle East. He collaborates with numerous online newspapers, including Saker Italia. 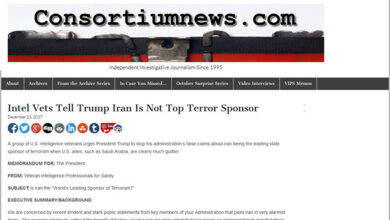