Without a Trace finds the Mojahedin accused of being terrorists: MEK camp is a prison! In Iran, MEK ordered us to kill people

Former members of the Mojahedin who fled the Iranian opposition’s camp in Manez and were then accused of terrorism, gave evidence in an interview with Without a Trace of the massacres that the former terrorist fighters, MEK, committed in Iran. They consider the camp in Manez a prison, they say they have left because they want to live freely.
Testimony: Some Albanian officials have been corrupted by this organization, this means we are not allowed to work, nor have a residence permit. It’s a fanatical organization. They want us in prison.


TIRANA – Three Iranian refugees, former members of the Iranian opposition MEK in Albania, who have left the organization, deny the allegations made against them. Hassan Hayrani, Abdurrahman Mohammad Jan, Gholam Reza Shekari were all described by Ali Safavi, a member of the National Council of Resistance of Iran, as agents of the Iranian regime who should be urgently arrested and expelled from Albania as they pose a danger to them, although their location was not known.
The Without a Trace show on Report TV investigated the case by finding out not only the whereabouts of the three aforementioned Iranians, but also conducted this lengthy interview with them. They live in Albania, in the Fresco area on the outskirts of Tirana, with a residence permit renewed every three months, and have dismissed all the allegations by clarifying their positions in the MEK organization they previously belonged to.
In an interview with Without a Trace, former members of the Mojahedin give evidence of the massacres that their former terrorist comrades have committed in Iran. These statements come shortly after the release of information by Albanian police that a year earlier it had prevented a terrorist attack on MEK members and that several persons, agents of the Iranian regime, had been identified as responsible. While they consider the camp in Manez to be a prison, these former members say they have left because they want to live freely.

Interviews conducted by the investigative editorial board of Without a Trace 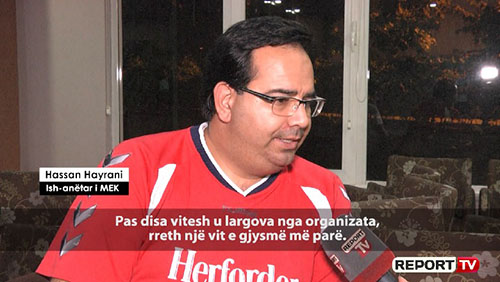 Hassan Hayrani: My name is Hassan, I am a former MEK member. After the fall of Saddam Hussein in 2010, I joined the organization. After a few years with them, I left the organization about a year and a half ago. And now I live here at Fresco, and thankfully this is the best opportunity for me.

When were you recruited by the MEK organization?

Hassan Hayrani: At first we came here after the leader of the organization promised us that the situation would change once we arrived in Albania. But sadly, after about a year, MEK leaders, with money coming from Saudi Arabia, set up a prison rather than a camp in Manez, similar to those in Iraq. There are other people in there who unfortunately can’t get out of this situation in Manez. We asked the leaders of the organization why are you forbidding us from having a family, forbidding outside contacts, no internet or freedom, and why do you say we are fighting for the freedom of the people of Iran, when you don’t allow freedom within the organization. They told us that they do not believe that these are the conditions inside and that they believe in freedom. The leaders of the organization told us that these conditions were there for our benefit at a time when Saddam Hussein was overthrown and the Iranian regime was spreading terror, and so under these conditions we agreed. But if you go to Manez, you will see that it’s like a prison, and that security is done with a shotgun. So, it’s just like a prison.

Are there any dangerous persons in this organization in Albania?
No, they do not have dangerous persons, because Albania is a safe country. There is no need for this to become a battleground either. But the leaders of the organization only want to turn the camp into a jail, to keep those living in Manez confined. The leader of this camp does not want members of this organization to have contact with other people outside this camp. And on the other hand, it does not want out-of-camp people to have contact with the people inside. For example, there have been cases where journalists have not even been allowed to interview persons living in Manez on the grounds that their news organization is affiliated with the Iranian secret service and they fear a terrorist attack. This is laughable. They only want us to have the toughest conditions here.
We escaped MEK without conflict, we are just looking for a quiet life. We have no problem with either the Albanian citizens or the Albanian government. We have been living here for 3 years, and we are free, we are living a peaceful life. We have no problem. It’s MEK who doesn’t tolerate us here. 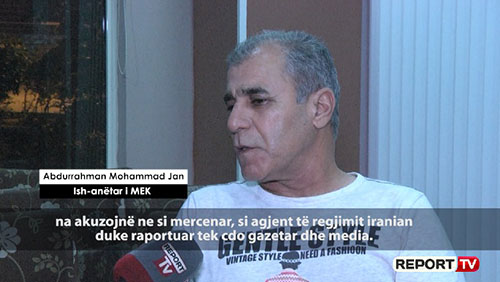 Who is accusing you?
The Mojahedin Organization called MEK, which you have already heard of, accuse us of being mercenaries, agents of the Iranian regime, they reported that to every journalist and media outlet here. Because we broke away from this organization to lead a civilian life and we now lead lives as civilians, they don’t allow us to do that. Our existence in this country, as free and civilized people, encourages other members to leave this organization.

When were you recruited by the MEK organization?
I’ve been a part of it for 28 years and have spent much of my life, my youth, with them.
I have given so much of my life, all they wanted from me. I decided to break away from this organization to have a free life. After all these years I have known about the terrorist acts carried out earlier, and that now they want to fall into American hands, I don’t agree with this, this is sufficient for me to want to live my life as a civilian. My free life here consists of all this. I lost all my life, maybe a lot, maybe a little. After so many years I found out about the free world, the free life and I wanted to live it. And when I saw free life here I decided to break away from this organization.
I decided to leave the organization three years ago. Now I live in Tirana.
A few days ago, the spokesman of this organization, of which I was a member, accused me of being an Iranian agent as well as a terrorist. He has no basis for this nor to ask the government to arrest me. This is faked news because they do not want me and my friends to live freely. This has created problems by limiting us and our lives here, they want to force us to move to another country, illegally if necessary. But even if we wanted to go to another country, we cannot because we have no documents.

What is the purpose of this organization?
When I decided to leave this organization, they were ordering us and dictating rules for us. They said, If you leave, we will pay for you, you can spend our money, but you have to obey some rules, such as: you can’t talk to anyone and you can’t live as you want. We will tell you who you should live with and what to do. I did not accept this and so received no money from the organization.

Then why did you accept to be a part of MEK for 30 years?
I really trusted this organization at first. When I joined, I believed. I believed in freedom, in democracy. I thought that the people in Iran would live freely. That MEK would bring democracy. But little by little I realized that this organization was a lie and that democracy would not come and that the only ones enjoying power were the leadership.

Did you witness the massacres in Iraq?

Have you been ordered by MEK to commit terrorist acts?
When I was in MEK, I was part of a group that would go to Iran and were ordered to commit terrorist acts; to detonate a bomb and kill people as terrorists.
I was part of a group, and there were plenty of groups who went to Iran to do the same thing, to kill people.
A small group consisted of 3 or 5 people and we went to Iran after crossing the border and went to several Iranian cities and killed some civilians.
I was in that group, but to my good fortune I didn’t act because I wasn’t ready to do it, physically, my body wasn’t ready to do it. And that mission was given to another person in the squad.

We ask the Albanian government to give us a residency permit, or another document to allow us to have a better situation. We need work, to make money. We need help.

Some of my friends are trying to earn money by doing business. Now we have spent all the money in the [Ramsa charity] package. My mom, my brother sent me money to help me make my life here.
Forty years ago, I was living with my family. When I was a soldier sent to the war front, I was a prisoner of war for 9 years during the Iran-Iraq war. Then I was with the Mojahedin for 20 years. For 40 years I have seen no one in my family. For 30 years I had no contact with them, because in MEK there were rules, no one, no one was allowed to call their family. 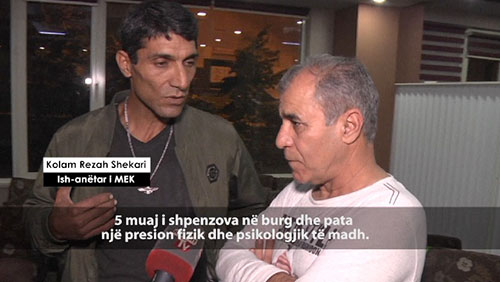 I’ve spent 20 years of my life with MEK and after that, I live as a civilian today. For a long time I had realized how great a lie MEK was. I spent 5 months in jail under them and was under great physical and psychological pressure. I decided to leave the organization. Why am I accused of being a terrorist when I am living a free life? I have also given an interview to the German media.
I work here in Tirana, work in the duralum, do electrical work, paint houses. I work for a living. I work from 8am to 8pm. How can I be a terrorist. Here’s my hands, how can I commit terrorist acts once I’m back from work. 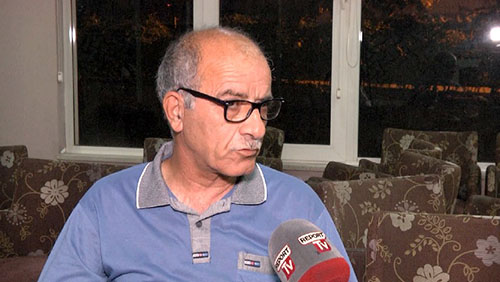 I was with MEK for 30 years, and I’ve been separated from MEK for a year and a half. I heard talk of news that we were accused of terrorism. In this organization everything we did was restricted. Even inside MEK the members were abused about this news, that we were terrorists and that we needed to be arrested.
Shqiptarja, translated by Iran Interlink