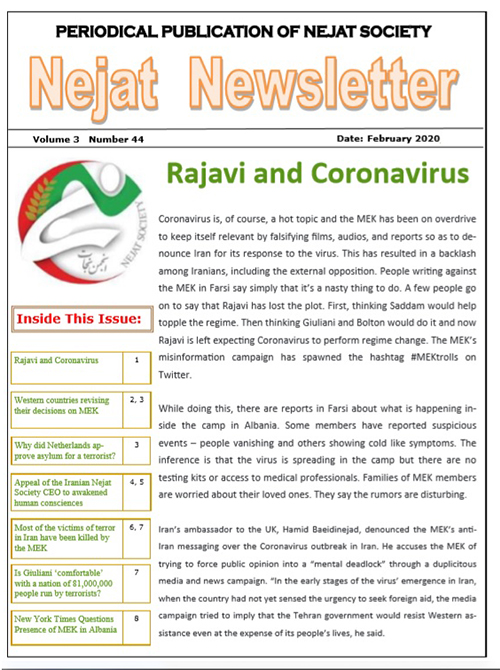 Coronavirus is, of course, a hot topic and the MEK has been on overdrive to keep itself relevant by falsifying films, audios, and reports so as to denounce Iran for its response to the virus. This has resulted in a backlash among Iranians, including the external opposition. People writing against the MEK in Farsi say….

– Western countries revising their decisions on MEK
This terrorist cult has been rejected by several governments around the world and, primarily it seems to have lost its power due to the high age of its members, who practically can no longer do anything but to create false propaganda against Iran using…

– Why did Netherlands approve asylum for a terrorist?
Mohammad-Reza Kolahi was not only a terrorist, but a big one. As an MEK agent he had penetrated a meeting of 70 top Iranian officials in 1981. Under the cover as the event production sound man he had literally mined the entire meeting hall with explosives in the speakers the night before…

– Appeal of the Iranian Nejat Society CEO to awakened human consciences
I address you on behalf of thousands of suffering families of members of the Mojahedin-e Khalq Organization (MEK, MKO, better known as the Rajavi cult) residing in a remote isolated camp in Albania, about the severe abuses of basic human rights there. The MEK finished the…

– Most of the victims of terror in Iran have been killed by the MEK
In European law, even operations that cause financial loss without risking lives are considered to be terrorist operations. Made by a person or organization with a design and with coordination and specific purpose. The purpose is to create terror among individuals….

– Is Giuliani ‘comfortable’ with a nation of 81,000,000 people run by terrorists?
The United States continues to support the Mujahedeen-e Khalk (MEK), despite the fact that that terrorist organization is losing popularity, not that it ever had very much anyway, around the world. The group remains basically based in Albania….

– New York Times Questions Presence of MEK in Albania
New York Times article is probably the first critical article on MEK’s presence in Albania in the mainstream American media. In the past, Exit News has published stories on the Iranian MEKs. One of our journalists was also granted access….