– POMPEO AND MEK ISOLATED BY RESPONSE TO PANDEMIC 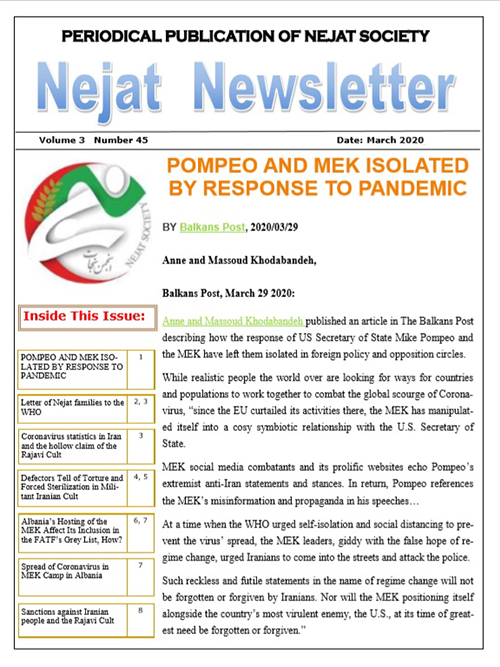 – Letter of Nejat families to the WHO
With regards, we address you on behalf of hundreds of suffering
families of members of the Iranian Mojahedin-e Khalq Organization (MEK, MKO, better known as the Rajavi cult) residing in a remote isolated camp in Albania, about their severe health situation considering the COVID-19 pandemic.

– Coronavirus statistics in Iran and the hollow claim of the Rajavi Cult
…Commentators say that MEK has gone mad, that this is the height of madness. The army is helping people! From one side MEK say the army is there to kill people and on the other side you say desert and bring your guns with you. Why? Where? To Albania?…

– Defectors Tell of Torture and Forced Sterilization in Militant Iranian Cult
On a blisteringly hot summer afternoon in 2006, Reza Sadeghi ran into an old friend at the Iraqi headquarters of the Mojahedin-e Khalq, an exiled Iranian militant group better known as the MEK. The two men had not seen each other in over a decade. Sadeghi guided his friend, who had just arrived from Canada, on a stroll through the desert compound known as Camp Ashraf….

– Albania’s Hosting of the MEK Affect Its Inclusion in the FATF’s Grey List, How?
Money laundry is an ordinary operational technique among criminal gangs and terrorist organizations to provide their own finances. However, this does not mean that governments do not commit it. In countries where mafia gangs are widely involved in money laundering, this criminal act can infiltrate financial institutions, acquire control of large sectors of the economy through investment, or offer bribes to public officials and indeed governments. ..

– Spread of Coronavirus in MEK Camp in Albania
Several pieces warn that the secret and closed lifestyle adopted by cults like the MEK makes them a danger to health and hygiene. The MEK’s camp in Albania is not accessible to the ….

– Sanctions against Iranian people and the Rajavi Cult
The Coronavirus crisis is revealing the true nature of various opposition groups and analysts.
There are many posting in social media that although the Iranian government should be criticized for its early handling of the crisis, the time has come to show humanity and halt the sanctions so as to allow the country to combat the virus…..