In 1985, Saeed was only one year old when his parents took him to Iraq, after a year of clandestine living in Iran. They crossed the Iranian border through Kurdistan Mountains to join the camp of the Mujahedin Khalq Organization (the MKO, MEK, PMOI, Cult of Rajavi) in Iraq. His mother Zahra Hosseini was not a member of the MEK before she got married with his father Mehdi Khoshhal, but the precarious marriage trapped the entire family in the cult-like structure of MEK. 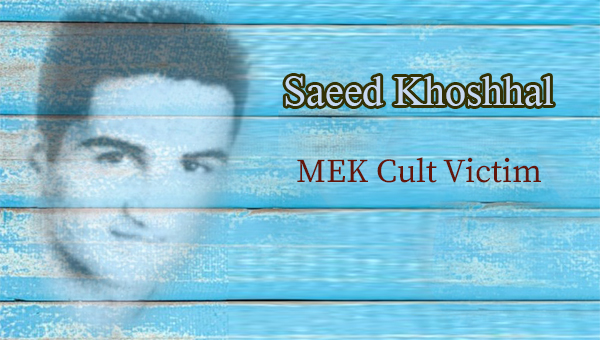 The life of Camp Ashraf required severe systematic violations of human rights. Couples were allowed to visit each other once a week for only one day and night. Zahra was unhappy with the regulations of the organization. She wanted to be with her husband and her son all the time. But, an organizational order forced her to even get separated from her four-year-old son.

Saeed had to stay in the children’s unit of the camp so that her mother can be more active and productive for the MEK. Two years later, the six-year-old Saeed got much farther from his parents. In 1990, Massoud Rajavi, the leader of the group ordered the transfer of seven hundred children of the group members to Europe.

Years later, Saeed was interviewed by the writer of a book about MEK children. He was at the age of 20 and was living in Wiesbaden, Germany. “We were living in dust,” Saeed says about the dark days of leaving his parents behind in Iraq. ”I was six years old, at the time. I recall those years of war. I remember the sound of aircrafts. We were about fifty kids who got on two buses and we were repetitively taken from one hotel to another one. We were taken from Iraq to Jordan and from there to Cologne. I was then taken to Hamburg to live with two sympathizers of the MEK.”

Although Saeed tries to think about the life ahead and not to get obsessed with the bitterness of his childhood, he states some facts about the MEK and their approach concerning children: “When I was in the MEK, I always had the feeling of being abused; I was used as a tool by them. When a child does not get kindness and attention, you can realize that there is something wrong with the environment. Mujahedin paid no attention to children. They just trained children to use them in future, just like training donkeys and cows in barns.”

Nevertheless, Saeed was luckier than most MEK children because he was not sent back to the MEK camp in Iraq. The main reason was his father who defected the group after Massoud Rajavi ordered members to divorce their spouses. Mehdi Khoshhal endured prison as a result of his opposition against Massoud’s order, but finally he could manage to leave the group. However, he was not allowed to see his wife who was shockingly brainwashed by the group. Zahra was not allowed to visit Mehdi because according to Massoud Rajavi’s order they were not married to each other anymore. So, Mehdi went to Germany to look for his son, Saeed.

Saeed grew up in Germany. He graduated from law school. His father joined him there but his mother only made one phone call in several years. “She asked some emotionless questions,” Saeed says about that only phone call. “A mother who calls her son after 13 years should be more passionate but that woman was so cool. She seemed to read her questions out of a book. She asked for my email and phone number to contact me again but she asked me not to tell my father about her. I told her that I did not trust her after 13 years of no news. I trusted my father and friends in Germany more than I trusted her.”

Saeed claims that he does not think about her mother anymore but his grandmother, the mother of Zahra Hosseini is still pursuing the case of her daughter in the MEK. In a letter to the Albanian authorities, she writes about Saeed too: “My grandson Saeed keeps in touch with his paternal family. He cannot speak Persian. We know that he has had no contact with his mother during the past years. I mean that the MEK leaders do not allow my daughter to have access to a telephone.”