In 2003, Maryam Rajavi inherited, or at least became de facto leader of, a political mind control cult, the Mujahedin-e Khalq, after her husband Massoud Rajavi disappeared. Fortunately for her, Massoud Rajavi had already spent over two decades creating the cultic conditions inside this anti-Iranian group that have guaranteed its survival: modern slavery based on misappropriated devotion to an outdated, unachievable cause enforced through a punitive regime of isolation, fear and punishment. Phew. This is certainly outside Maryam Rajavi’s competence. She is neither a charismatic leader, nor a political strategist, nor anything other than a face and name to trigger obedience among Rajavi’s followers. However, she has been able to use his formula and foreign money to keep the MEK going. 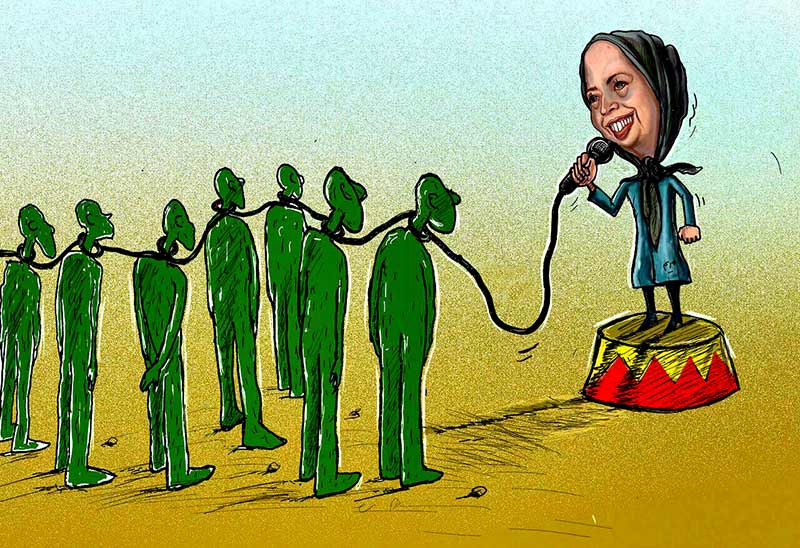 Maryam clearly learned from her husband how cultic abuse could keep the MEK members obedient, using lieutenant enforcers, loyal devotees and useful idiots. As part of the lessons she learned, she has, for two decades, used the label ‘agent of the Iranian regime or intelligence services’ to denounce and demonise and thereby frighten her critics; the majority of whom are former members who have spoken out since leaving about the atrocious human rights abuses they suffered and which are still being inflicted on the trapped membership. The label, which also applies to non-Iranian critics such as western journalists, has become so widely spread that it is not only ludicrous to imagine that the current MEK is harbouring ‘agents’ who simply haven’t left yet, but also to imagine that the Iranians are so powerful they can recruit thousands of specifically anti-MEK agents whose only goal is to infiltrate then destroy the MEK by leaving, someday – a claim even more ludicrous considering all the real-world problems Iran faces. And they still haven’t been able to destroy the organisation.

So, in this context it is interesting that after all this time Maryam Rajavi has suddenly become upset over the description of MEK as a cult and has published on the MEK internet outlets denials and denouncements that the Iranian regime has created this label to destroy the MEK.

But here’s the thing. Since the establishment of the Islamic Republic under Ayatollah Khomeini, Iran’s rulers and media have consistently referred to the MEK only as Monafeqin, a Quranic phrase which translates as ‘Hypocrites’, i.e. not true Muslims. There is no track record of publicly, persistently accusing the group of being a cult. Something else is going on here.

Could it be that Maryam Rajavi felt so safe in her tick box method of cult leadership – defame every critic as an agent of the regime – that she neglected to listen to what her critics were actually saying and the public impact that has had. For years, former MEK members have explained and exposed the internal dynamics to anyone who would listen. Compelling and consistent evidence has led experts in cultic abuse such as ICSA and FECRIS as well as human rights organisations, to recognise the organisation as a cult. Simply put, that means the members are suffering abuse. Investigative media reporting has reflected this reality. This has now reached legal recognition as a German court has determined that MEK behaviour toward underage members amounted to abuse. This has led to the MEK being recognised as a toxic brand in international parliaments and forums.

A quick look into the MEK’s recent history might explain Maryam Rajavi’s dilemma. While the MEK was based in Iraq just off the border with Iran and had weapons and the military backing of Saddam Hussein, the leaders could ignore labels or criticism. Rajavi had the support – financial and political – of various anti-Iran parties not least Rudi Giuliani, John Bolton and John McCain which allowed her to brush off criticism. She had access to parliaments in Europe and North America, she held fancy rallies in which she posed as the saviour of Iran. These have all gone. After its move to Albania, the MEK was reduced to churning out misinformation and false narratives about Iran, swapping guns for clicks, so that the MEK have become the equivalent of porn stars in fuelling the political fantasies of the pundits who consume their political trash.

But the organisation itself is becoming weak and diminished. It is shrinking with deaths and defections, unable to recruit and replenish its ranks. Unable to stop the ageing process of its current members. Unable to hide the obvious fact that after forty years the MEK is no longer a player in the political scene of Iran.

The MEK brand for Maryam also carries an extra burden. She has already appointed her Qajar relatives to leadership roles and sidelined Massoud Rajavi’s family and friends. The continued reference to the MEK as the Rajavi Cult reinforces his name. She needs to have the organisation associated with her family name Azodanlu.

Finally, a home goal by then President Donald Trump – the assassination of general Qassem Soleimani – means that regime change or a colour revolution is completely out of the question. Now with the election of Ebrahim Raisi, Iran is looking East, not West. Raisi’s Iran regards the west as a distraction, not a problem. Russia and China are opportunities for Iran. Now everyone is left with the question, ‘what is the MEK for?’

It’s as though Maryam Rajavi – and or her sponsors – have only recently woken up to this desert of opportunity and paucity of relevance. Her reaction has been to blame everyone except her own cruelty and incompetence.

In the end, the labels and where they originate are not too important. Instead, it is deeds not words which will continue to determine the future of the MEK. As long as it remains on this dysfunctional path the members will suffer. Then they will die. Those who have the power to dismantle the MEK safely and humanely in the short term should choose to do so. If they choose to leave the members to rot and their families to grieve, the reputation of western democracies will be dragged deeper and deeper into the mud. The result will be the same. But just a little hard headed, cost free humanity on the part of western political leaders now would make all the difference.