The MEK is NOT the voice of Iranian Nation

A petition was created on Change.org against an article on the National Post that promotes the Mujahedin-e Khalq as the alternative of the Iranian government.

On November 1st, the National Post published an article, titled “Tony Clement: Iran’s Pro-Democracy Resistance Deserves the West’s Support” in which the former Canadian federal politician and former member of Parliament claims to have issued a statement along with eighteen other former government ministers from Canada and the European Union urging Western Powers to recognize the MEK as a legitimate alternative to the current government in Tehran. The so-called statement calls for Maryam Rajavi to install a provisional government as a transitional president. 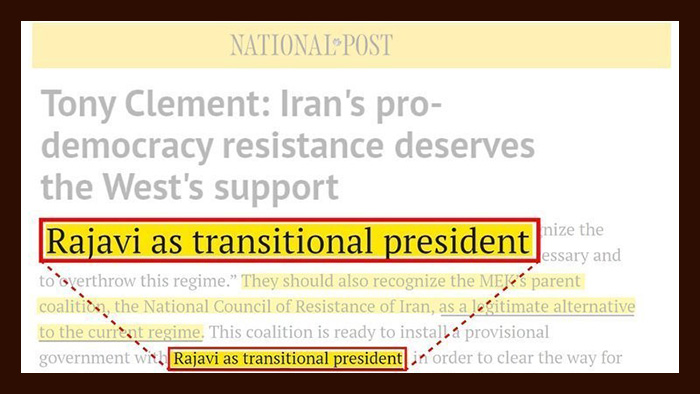 he petition considers the MEK “a deeply problematic group” that never presents the aspirations of the Iranian nation. It offers a brief history of the group atrocities and treasons:

So, what is the MEK?

MEK is a political-militant organization, described by critics as a ‘totalitarian cult’, currently led by Maryam Rajavi whose primary mission is to overthrow the I.R.I. According to an estimate by the United States Department of Defense in 2011, the guerrilla group has between 5,000-13,000 members, the majority of whom live in Europe and the US – with currently no support or relevancy in Iran.

MEK was designated as a terrorist organization by the US in 1997. The group has taken responsibility for many acts of terrorism over its inception in 1960s, including:
• Involvement in the killing of 6 US citizens in Iran in the 1970s
• Staged attacks against civilian and military targets across the border in Iran for over two decades
• Involvement in Sadam Hussein’s genocide against the kurds in 1991
• Attacking Iranian embassies in 13 countries including Canada and the US in 1992
• Assassinations of Iranian nuclear scientists in 2012

After years of intense lobbying, MEK managed to reverse its designation as a terrorist organization across the western world. By rebranding itself as a pro-democratic group that advocates for gender equality, the MEK does little to hide its ties to the ultraconservative and autocratic government of Saudi Arabia. As Britain removed the group of its terror list in 2008, the European Union followed suit in 2009, followed by Canada and the United States in 2012 – allowing for MEK to lobby freely.

We urge the leaders of Canadian political parties to practice their solidarity and advocacy by listening to the demands of Iranian people; to condemn Mojahedin-e-Khalq (MEK) and all of its fronts and campaigns; and to recognize that MEK is NOT the voice of Iranian people.

MeK Believed They Could Wipe out IRI with...