Deciding the fate of the Mujahedin

The Bush administration inherited many of Iraq’s problems when it invaded that country, including an Iranian terrorist organization funded and armed by Saddam Hussein, the Mujahedin-e Khalq (MKO). Though in the midst of a war on terror, the Bush administration chose in 2003 to protect 3,000 of the organization’s militants and house them in a camp given to the group by Saddam — Camp Ashraf just north of Baghdad. 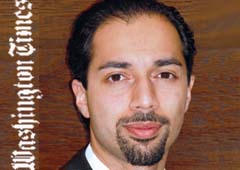 Ever since, the faith of this State Department-listed terrorist organization has been unclear. Hated by Iraqis for its involvement in Saddam’s crimes against the Iraqi people, the Baghdad government wants to expel the group. But no country is willing to take them.

Though the Iranian government wants to put the group’s leadership on trial in Iran, it seems less interested in the organization’s rank and file. The European governments have little interest in taking in 3,000 battle-hardened Muslim militants, fearing that they will use Europe as a base to plan and execute further terrorist attacks.

The U.S., on the other hand, has already contradicted its own principles by giving preferential treatment to an organization on the State Department’s terrorist list — even though President Bush himself pointed to the organization’s patronage under Saddam Hussein as evidence of Iraq’s support for international terrorists in his speech to the United Nations in September 2002.

To complicate matters further, if reports that the U.S. has used MKO terrorists for cross-border raids into Iran are true, then Washington certainly doesn’t want these militants to end up in Iranian hands.

Members of the terrorist organization have protested outside the White House this past week, angered by the Bush administration’s decision to hand over Camp Ashraf to the Iraqi government. The government of Iraqi Prime Minister Nouri al-Maliki will surrender the MKO members to Tehran, they argue, who in turn will imprison and execute them.

Though approximately 500 MKO fighters have been repatriated to Iran and no reports of abuse have emerged according to the International Committee of the Red Cross, which oversaw their return, sending rank-and-file Mujahedin members to Iran against their will would be irresponsible.

Hated by the Iranian people for having fought on Saddam’s side in the Iraq-Iran war, the Iranian Mujahedin is understandably fearful of the fate awaiting them in Iran.

Yet, contrary to the protesters outside the White House, the issue is not a choice between freedom in Camp Ashraf and captivity in Iran.

The Mujahedin is not an effective opposition to the government in Iran as the organization’s defenders in Washington claim, but a politico-religious cult that brainwashes its members, places children of Mujahedin members with other families in order to prevent parents from defecting, and who according to Human Rights Watch, maintains control by torturing its rank and file. "Members who try to leave the Mujahedin pay a very heavy price," according to Joe Stork of Human Rights Watch.

Its involvement in terrorism is undisputed. It assassinated several Americans in Iran in the 1970s. It supported the taking of the U.S. Embassy in Iran and blasted Ayatollah Khomeini for releasing the American diplomats in 1981, arguing instead that the hostages should have been executed. It made a pact with Saddam Hussein in the 1980s and fought alongside his army against their Iranian countrymen. Later in the 1990s, they became Saddam’s most trusted henchmen, tasked with quelling Kurdish and Shiite uprisings against the Iraqi dictator.

According to defectors, Mujahedin members in Camp Ashraf celebrated the Sept. 11 terrorist attacks.

In 2004, French authorities descended upon the Mujahedin headquarters in France, arresting the leader of the cult, Maryam Rajavi. Immediately, zealous Mujahedin members staged hunger strikes and several set themselves ablaze. Hardly the behavior of a democratically oriented opposition group.

But the vast majority of the Camp Ashraf residents are not so much members of a terrorist cult as they are victims of it. The camp is itself a prison. It may have provided Mujahedin militants with protection against ordinary Iraqis who sought to avenge their relatives killed by the Mujahedin at the behest of Saddam Hussein, but the prison has primarily enabled the leaders of the terrorist organization to prevent the rank and file from defecting.

Rather than debating where to expel the Mujahedin terrorists, help should be provided to the rank and file to break with the cult and make free choices about their future. It’s the only humanitarian solution to this dilemma – and one that defeats rather than protects this anti-American terrorist group.