Two MKO members with a long history of terrorist activities have reportedly been apprehended by the Interpol police in Finland.

Two men were taken into custody upon entering Finland on Sunday, according to Finnish daily Helsingin Sanomat. 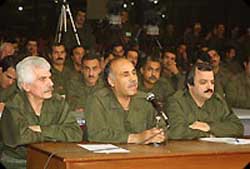 The men have traveled to Finland to pave the way for a visit by Maryam Rajavi, the wife of the founder of the Mujahedin Khalq Organization (MKO), who is herself a high-ranking member of the terrorist group.

Officials in Helsinki believe the two men do not pose a threat to Finnish national security but are set to decide on whether the country will extradite the criminals to Iran to face trial.

The 62-year-old Hadi Roshanravani is the top MKO operations intelligence official. He had been conducting espionage operations in Iraq and Europe for decades with the support of the last Iraqi dictator, Saddam Hussein.

The 60-year-old Mohammad-Ali Jaberzadeh Ansari is a high-ranking MKO theorist that had been tasked with legitimizing the various terrorist operations carried out by the group in Iran and Iraq.

The MKO has committed acts of aggression against both Iranian and Iraqi nationals and remains banned by the European Union and the United States. In a recent move, however, Britain removed the MKO from its blacklist of terror organizations.

The UK initiative has prompted the European Union to establish relations with the exiled organization now based in Paris. The European Court of First Instance threw its weight behind the MKO on Thursday and annulled its previous decision to freeze its funds.

The recent support for the MKO has led the group to initiate various trips to Europe and the United States to lobby for its removal from the lists of terrorist organizations banned by Western countries.

Evidence links the group to the June, 1981 bombing of the offices of the Islamic Republic Party, in which more than 72 Iranian officials were killed, including then Judiciary chief Ayatollah Mohammad Beheshti.

The assassination the following August of Iranian president Mohammad Rajae’i and prime minister Javad Bahonar has also been attributed to the group.