Iran-Interlink reporting from London – Nejat [Rescue] Society, an Iranian NGO, has sent a delegation to London to brief policy and decision makers, human rights organisations and media on the US army handover of the Mojahedin-e Khalq’s (MKO, MeK, NCRI, PMOI) military base, Camp Ashraf, to the Iraqi military on January 1st 2009. 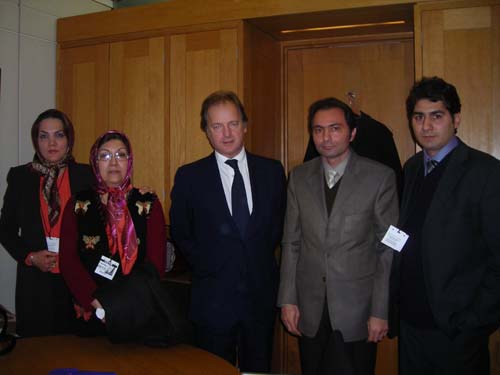 In a meeting yesterday with Mr. Hugo Swire, MP, Chair of the Conservative Middle East Council and Chair of the UAE All-Party Group, Nejat delegates described the worsening human rights situation for the remaining captives inside Camp Ashraf.

Arash Sametipour said, "The Iraqi government has given guarantees that none of the captives will be forced to return to Iran against their wishes. The most serious threat to those left in Camp Ashraf comes from the MKO cult’s leaders, Massoud and Maryam Rajavi. They will want to use their blood to extricate themselves from this crisis."

Nejat is asking all UK agencies to cooperate with the Iraqi authorities to help restore basic human rights to the people trapped in Camp Ashraf.

Nejat’s demands are that:

1. A separate camp is re-opened adjacent to Camp Ashraf to which people can

2. The gates of the camp should be opened to allow doctors, families and

humanitarian agencies free and unfettered access to the inmates.

Arash Sametipour said, "Every individual person in Camp Ashraf must be given the opportunity to decide for themselves – without pressure or interference from MKO personnel – whether to continue wearing military uniform, or to renounce violence and become civilians. The Iraqi authorities should open a separate camp where people can take refuge."

Nejat Society believes the captives should be given access to external information, internet, radio, television, books, newspapers and conversation. Above all, the people in Camp Ashraf must be helped to contact their families and enjoy family visits as soon as possible.

"Contact with their families re-connects the cult member with their emotions and provides a normal, trustworthy frame of reference in which they can reassess what the cult is telling them," explained Babak Amin.

Mrs. Iranpour told Mr. Swire, "I visited the camp twice to see my brothers but the Americans army takes orders from the cult leaders. Once the Iraqi government is in control of Camp Ashraf, I hope it will be possible to freely visit our loved ones again."

Nejat Society is in London for two weeks.