MONTREAL — The Argentine government is determined to finally get to the bottom of the notorious bombing of the AMIA Jewish center in Buenos Aires 14 years ago, the country’s consul general in Montreal said. 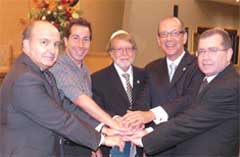 “Our AMIA victims have imposed on us a moral mandate to respect their memory and ensure our commitment and efforts to pursue, locate and condemn those responsible,” Guillermo Tagino said at a community commemoration at Congregation Dorshei Emet, held a day before the July 18 anniversary of the attack.

“In spite of the difficulties presented by the passage of time, our will to solve this brutal crime has not diminished.”

No one has ever been convicted for the crime, but in October, 2006, Argentine prosecutor Alberto Nisman formally charged the Iranian government, accusing it of directing Hezbollah to carry out the suicide bombing, which nearly razed the AMIA building, killing 85 and injuring several hundred.

Yet those events seemed to serve as a reminder of the years of alleged incompetence, obfuscation, cover-up and corruption tied to the attack’s investigation under the governments of former Argentine presidents Carlos Menem and Nestor Kirchner (the current president is Kirchner’s wife, Cristina Fernandez de Kirchner).

At one point, Menem was even accused of accepting a $10 million (US) bribe from the Iranian government to block the investigation, a charge that was adamantly denied by Menem.

A few years ago, Nestor Kirchner himself acknowledged his government’s culpability, calling it a “national disgrace.” Over the years, those allegedly linked to the bombing have ranged from Iran and Hezbollah to members of Buenos Aires’ own provincial police, La Bonaerense.

At the synagogue, Tagino said that the Argentine government “has recognized… the state’s responsibility for the consequences resulting from the cover-up of the facts and grave failure in the process of investigation.”

That government declaration to that effect, he said, was deemed “historic” by Inter-American Commission on Human Rights, particularly because it produced “a series of steps… to fully remove obstacles which hindered the investigation.”

Tagino continued: “In this way, the national state made a political decision to reach a definitive clarification of the attack and put forward all necessary resources towards this goal.”

He added that the country’s intelligence archives have been opened and “state secrecy lifted,” all of which is allowing access to documents that are crucial to the investigation.

He also lauded the Argentine justice department for welcoming the collaboration of Interpol in investigating the bombing, and he noted that Memoria Activa, a group committed to keeping the memory of the victims alive and lobbying for justice, has “recognized the progress made” over the last few months.

“The attack was against the entire Argentinian people, and there will be no respite” until justice is done,” Tagino pledged.

Among others paying tribute to the AMIA victims at the commemoration – co-sponsored by B’nai Brith Canada, Quebec region – were Israeli consul-general Yoram Elron, Liberal MNA Lawrence Bergman and B’nai Brith’s Moise Moghrabi. The names of the 85 victims were read aloud and the path from the synagogue’s doors to the speaking hall was marked by 85 yahrzeit candles.

Also supporting the event were Argentinian Jews of Montreal (JALOM), and the YM-YWHA.