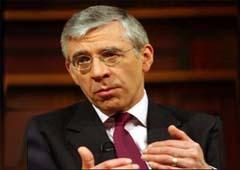 British Secretary of State for Justice Jack Straw said on Wednesday that his country firmly believes in the terrorist nature of the MKO group, despite a controversial decision last year to remove the dissidents from the UK terror list.
Straw said he sorely regrets the British court ruling which de-proscribed the grouplet from the country’s terror blacklist.
"When I was the home secretary, I said it was a terrorist group and the parliament agreed. The difficulty is that there is an independent kind of court which can make the final decisions out of the law. And it decided that the evidence do not support what the government was saying," Straw told IRNA in an exclusive interview.
Following a UK court ruling in 2008, the British parliament lifted the terror ban on MKO — irrespective of the abundance of evidence pointing to the group’s 40-year history of performing terrorist operations in Iran.
The group masterminded a slew of assassinations and bombings inside Iran, one of which was the 1981 bombing of the offices of the Islamic Republic Party, in which more than 72 Iranian officials were killed, including then Judiciary chief Ayatollah Mohammad Beheshti.
Earlier in January, the European Union decided to follow in Britain’s footsteps and moved to redefine the group as a non-terrorist organization, annulling its previous decision to freeze MKO funds.
The Mujahedin Khalq Organization, which blended elements of Islamism and Stalinism, was founded in Iran in the 1960s but was exiled some twenty years later for performing acts of terrorism in the country.
A 2007 German intelligence report from the Federal Office for the Protection of the Constitution has identified the MKO as a "repressive, sect-like and Stalinist authoritarian organization which centers around the personality cult of [MKO leaders] Maryam and Masoud Rajavi".
High-ranking MKO members have camped-out in most of Europe’s parliaments for the past two years and have managed to gain scattered support from various high-ranking circles in the West.
Anne Singleton, an expert on the MKO and author of ‘Saddam’s Private Army’ explains that the West aims to keep the group afloat in order to use it in efforts to stage a regime change in Iran.
"With a new Administration in the White House a pre-emptive strike on Iran looks unlikely. Instead the MKO’s backers have put together a coalition of small irritant groups, the known minority and separatist groups, along with the MKO. These groups will be garrisoned around the border with Iran and their task is to launch terrorist attacks into Iran over the next few years to keep the fire hot," she explains.
"The role of the MKO is to train and manage these groups using the expertise they acquired from Saddam’s Republican Guard," Singleton added.