Most Ashraf residents willing to leave the Camp

MKO terrorists at their headquarters at Camp Ashraf.

A number of Mujahedin Khalq Organization members reportedly leave Camp Ashraf after Baghdad started a countdown to remove the group from Iraq. 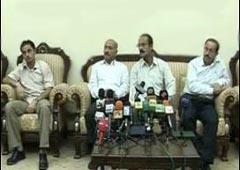 Some dissident MKO members aim to return to Iran as the terrorist organization has denied its members the right to choose an alternative place to stay.

The dissidents have held a press conference in Baghdad where they complained of their”tough situation”in Camp Ashraf — the MKO’s military training headquarters in the Iraqi province of Diyala.

Baghdad has vowed to move MKO members to their country Iran or send them to a third country as it holds the anti-Iran group responsible for destabilizing Iraq.

Ali Kaki, one of the dissidents, told al-Alam that most of 3,500 members of the group residing in the camp suffer”lack of freedom of thought and operation”.

Vali Khodabandeh, another dissident, also said that the leaders of the terrorist group have prevented the residents of the camp from leaving.

The anti-Iran MKO is blacklisted as a terrorist organization by many international entities and countries, including the US.

The group was exiled from Iran after the Islamic Revolution and settled in Iraq in 1986, where it enjoyed the support of former Iraqi dictator Saddam Hussein.

The MKO is responsible for numerous acts of violence against Iranian civilians and government officials as well as Iraqis.

Tehran has long called for the expulsion of MKO members from Iraq, saying that the members of the group who have not participated in terrorist activities can return home but others will need to stand trial.

Download Most Ashraf residents willing to leave the Camp

A Half-Way House Will Help MEK Victims Escape to Freedom