Memoirs of Ms. Batoul Soltani – Part 14
I would like to discuss a phenomenon called the “Leadership Council” from its different aspects. After the foundation of his so called leadership Council, Rajavi found it useful. 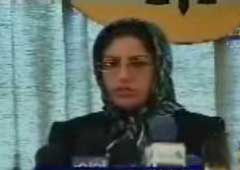 In fact, this body had several benefits for him. It’s most important advantage was that anything Rajavi wanted to be done was accomplished as soon as possible.

“If this operation had to be done before the formation of the Leadership Council, I would have had too much challenge to convince Mr. Hassan Nezam to prepare a unit for the operation, but now when I explain a plan for Ms. Roqayeh Abbasi or Ms. Mahvash sepehri, I don’t have to challenge them. I just tell them to do the plan and they go and operate it." Rajavi alleged in a meeting after an armed operation.

Rajavi didn’t care if Hassan Nezam or Abbas Davari have the knowledge and skills to carry out the task. Their qualifications are much higher than the women who have just taken their positions in the organization and have no idea about the necessities of an operation. In fact, he didn’t care what the result would be; he just wanted them to say “Yes”. He also said:”The main part of the operation is performed in my office”. Therefore, after a while,”No” became a forbidden word in MKO.

Masud Rajavi said: ”if an official says “Yes, it is possible” and goes to operate it ,it will be sufficient for me”. He also asked the leadership Council to make their men work so hard that “they become so thin” saying that:”I don’t want those who say “No, it is impossible”. The problem was that he couldn’t accept “No” as an answer.

Then the organization launched a propaganda campaign for their new establishment called the “Leadership Council” claiming that such a founding was the only one in the whole world and even a single man member could not be found in it, and this was a privilege for women and Masud Rajavi’s ideological revolution. They called it a masterpiece in the human history that their Leadership Council consisted of just women. This was a new pastime for the members in the Camp. They talked about their new phenomenon that was an innovation in the entire world. The pastime aspect of the leadership Council was used as a tool just inside MKO and not outside of it.

The other argument was about the male members who once had their own hegemony and now they had to allegedly divorce their positions and submit them to female members. Rajavi told the men that they should liberate themselves from individuality by divorcing their hegemony and giving it out to the women and they shouldn’t think of being the superior sex anymore. By these interpretations, Rajavi tried to deceive them to leave their positions. Thus every man who wrote reports confessing that he didn’t want to submit his hegemony to women was considered as a superior member by Rajavi. In his opinion such a person was more advanced within the organization and never had an untold story. Therefore, a new pastime occupation was made for male members.

After some time, Rajavi added new groups to his Leadership Council and began to specialize some of them. He made those people design the projects for specialization. So a group of people were busy with a new game! On the other side passion of promotion was flaming among female members. They were motivated to grow to go to the higher ranks but when they reached the higher levels there were contradictions before them and they had to allegedly solve their contradictions.

Every individual in any level of the organizational pyramid had to solve the contradictions around his responsibility. They have to write their Facts (how they encounter the phenomenon) so they are always busy working.

I remember when Maryam and Masud declared the most recent number of the Leadership Council’s members. They claimed that they wanted all women in MKO to be the members of the leadership Council. When I escaped the organization the number was over six hundred who had been tricked to become the members of the Leadership Council. Of course these people had a crucial contradiction: there are not enough responsibilities to assign all these people to. They sent a group of them to Europe along with Maryam. A group of them were specialized for certain duties. A number remained without any responsibility.

Therefore, even in the Leadership Council there was an irony calling the Council being shallow or formal. Some people were just tricked by Rajavi. They only attended weekly meetings to discuss the challenges in the leadership Council. He assigned Maryam Rajavi to solve the problems but she didn’t succeed. Then Faeze Mohabatkar was assumed as the official to provide hospitality and comfort for members of the council. It was too difficult to provide personal car, office, desk … for all of these numerous members. This caused the most pressure on the organization. To remove the trouble they defined “the member of Leadership Council” as a dog who barks for his owner”. During the special meetings in layers of leadership council, they manipulated the members under too much pressure to convince them to accept their definition of leadership council.
Translated by Nejat Society