There are arguments that Mojahedin from the very beginning have put emphasis on having adopted a fundamentally religious ideology. It cannot be denied since at the time when the 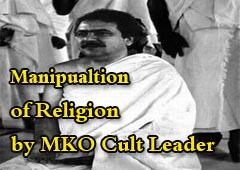 organization started its activities, it was mainly due to the specific social, political and religious conditions of the society rather than sincere faith in religion that made the organization to make such claims. In fact, the early Mojahedin were very anxious to create an ideology that justifiably approved armed struggle according to Islamic decrees.

In fact, Ideology is a tool best utilized by Mojahedin leadership for the fulfillment of his political and cultic objectives and through which he has so far lured a remarkable amount of sympathizers. It has played a crucial role in the development of the organization up to now and has served a variety of historical, social, and political purposes. Mojahedin had well perceived that the emotional essence of religion rose out of spontaneous mass agitations and the collective passions these generated. It could draw masses into the streets, arm them with the smallest weapons to highest effectiveness, and could instigate a revolution as it could distract an already started one.

Basically having adopted an eclectic Islamic-Marxist ideology, the ideology of the organization, through its history and in any phase, depended much on the main objectives it pursued and functioned as a pretext for the fulfillment of its objectives. On the one hand, they looked at it instrumentally with regard to political and social conditions of the society; on the other hand, some others have extracted the necessity of struggle from religious doctrines. However, religion has been considered mainly as a means to achieve political goals.

The first ostensive move in this respect is the occurrence of the ideological schism of the organization into Islamic and Marxist wings due to the fact that some members came to believe that religion in itself was not capable to solve all social and political challenges of the society. Therefore, it was deemed necessary to replace the eclectic ideology of the organization with a clearly unveiled one that well defined their position in the path of the struggle they followed. Although the former wing claimed to have remained loyal to Islamic principles, it was nothing but a mere sham.

As Torab Haqshenas, an ex-Mojahedin member in states when giving details on dualistic views of Mojahedin on the form of religion and ideology they had to adhere to, “Mojahedin tried to confirm the fundamental concepts of their ideology by means of religion that was intermingled with the [Iranian] dominant and conventional culture. Therefore, they had to be cautious about whatever could be regarded as anti-religion and they justified whatever they told according to Quran. For example, if members theorized that working was of great value, they had to present evidences from the Quran.”

The following events, especially after the beginning of the Islamic regime in Iran, brought to surface what the organization had long masqueraded as Islamic ideology. As it was expelled from Iran and it had no more any hope of winning the Iranian people’s support, it had to search for the ways to preserve the remnant of its body to survive. Now the ideology had to be abused as an instrument to advance certain non-collective interests and to secure authoritarian hegemony of Rajavi. Considering the course of events after the beginning of ideological revolution within MKO well clarifies the organization’s real intention and how Rajavi in all these years had misused ideology and religion in order to justify his egocentrically made decisions.

His so-called ideological marriage with Maryam Azodanlu, considered to be a turning point in the history of the organization, was an evident example of misusing religion for his selfish, egocentric ends. Although Rajavi made justifications for this revolutionary move with a focus on religious values, nobody doubted that Rajavi was heretically misusing off course. In the amazement of the majority of the members neither Maryam Azodanlu’s divorce from her husband, Mehdi Abrishamchi, nor her immediate remarriage with Rajavi corresponded with Islamic conventions.

Rajavi exploited religion and the ideology that was intended to help advance a struggle for a certain cause; he abused it for the establishment of a most anti-social phenomenon that somehow makes people have a jaundiced view of religion that is a cult. He accredited himself a god-like and prophetic status whose mission was, and still is, to guide not only his followers but the world. The mere claim of being a cult’s maharishi with a developed eclectic ideology is enough to jeopardize the security and well-being of any society. The problem is even greater with MKO and the Rajavis at the lead; they have developed traits and characteristics of a notorious terrorist organization synthesized with that of a dangerous cult. 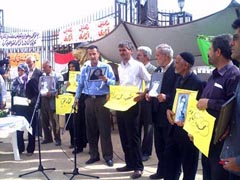 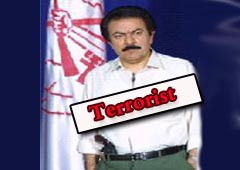