[The question is who is feeding MKO and what are the financial sources?
Where is this huge amount of funding come from?] 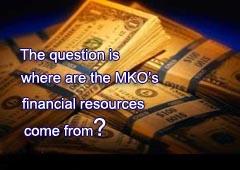 belonging to one of the members of the Iraqi Ba’ath Party Salih al-Mutlaq in order to carry out propaganda against the Islamic Republic of Iran.

According to Habilian Association database quoting from the Iraqi news site of Aljewar MKO asked the authorities in Al babeliyah Television network, via providing them with financial helps, to intensify their propaganda against the Iranian government and the people.

The news also reveal that MKO has donated the sum to those in this TV network who struggle more in destroying the image of Iran.

MKO has also dedicated a fixed financial aid for those in the network who write or make programs against Iran.

The above mentioned satellite television network of Al babeliyah belongs to Salih al –Mutlaq who is a notorious anti Iranian Iraqi MP that has called for the survival of MKO terrorist cult in Iraq despite severe opposition of Members of Parliament and government of Iraq for the presence of MKO on the Iraqi soil.

He is an agent of the previous regime in Iraq and has still kept his belongings to the Ba’ath party.
Al-Mutlaq is a member of agriculture commission of the Iraqi parliament and was in charge of livestock and poultries of Sajedeh (Saddam’s wife) during the former regime in Iraq.