Q. Would you please introduce yourself and explain why you joined and defected from MKO?

A: I am Hadi Negravi. In 1989, I got familiar with MKO in Turkey where I was trying to immigrate to 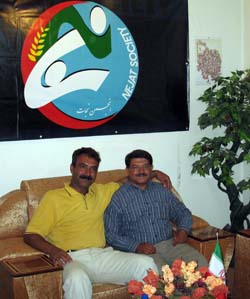 Germany. The organization promised to help me go to Germany, so I was recruited by their agents. In 2004,I left the organization and after living in American Camp for about one year, I returned to Iran voluntarily.

Q: How did you evaluate the internal relations in MKO during the years of your membership?

A: When I joined the organization, I didn’t have any idea of the ruling atmosphere in it, particularly because they behaved so friendly in Turkey, always speaking of freedom but after a few months of residing in Camp Ashraf, all my presuppositions was ruined by the organization which was totally controlled by the Regime of Saddam Hussein, as their commandant.

The organization was so closed that nobody could express his idea freely. Everything was decided in the hierarchy of the organization’s leaders. The members didn’t have the absolute right to choose their own fate (whether to stay or to leave the organization). They didn’t possess their own personal life, the right to marry or divorce; the most natural rights of a civilian.

Q: Regarding that you are completely aware of the terrorist acts of the group and experienced it; do you think the organization could basically renounce violence and armed struggle?

A: Not at all. Arm and armed struggle and spreading violence are the most basic principles of MKO‘s ideology. When Rajavi considers arm as his most cherished thing saying that “we cannot survive in our organizational form without arms”, do you think that such an organization can leave armed struggle.

They also use weapons and culture of violence to suppress the internal forces, so they are not able to survive in a liberal democratic atmosphere based on free will, logic and tolerance.
They have to be armed to be able to spread their believes since their inhuman nature meets no common sense in today world.

Q: Mr.Negravi, eight months after your return to Iran, the cult of Rajavi [MKO] declared that you were killed by the Islamic Republic in Iran. How can you reply such nonsense?

A: When I heard the news, I laughed. I have to tell them “shame on you, you were the ones who ruined me.”Due to the psychological torture I suffered for 15 years, I was under psychiatrists’ treatment to rebuild my spirit. Now I have torn the so-called revolution of Maryam Rajavi: I got married, I have a kid and I’m living a happy life with my family. Since my return all Iranian authorities had human respectful behavior towards me. To reassure anyone who doubts about it, I can announce my address and phone number, via this media, to contact me and make sure about my health.

Q: You might have heard the news on MKO cult’s involvement in turmoil after the Iranian Presidential election and that its agents have launched some terrorist acts. As a person who had been in Ashraf for years what do you think of their recent acts?

A: Yes, Definitely, this is exactly what is expected from an organization with such nature and characteristics like MKO. I can remember, the eighth presidential election, when they sent their terror teams to disturb the elections. In MKO, election is a meaningless phenomenon and the leaders of MKO know well that in each Iranian election large numbers of people give their votes. MKO has been far from Iranian political and social scene for years so they have no idea about Iranian society.

In fact MKO is an isolated cult with a much closed perspective. The surprising fact is that the ones in MKO, who call for free elections, have never held an election in the whole history of their organization.

Although they claim for democracy and human rights, they label the dissident members in the group as the agents of Islamic Republic Intelligence Ministry and traitors and send them to Abu Quraib. In MKO, we never had the right to think.

Q: How did the cult treat those who didn’t want to stay in the cult and sought to live a free life? For instance, in your own case, how did they react?

A: I’d say that using the word “life” is considered as a big sin in the organization. They always told us:”You chose your path the first day, so you have to stay until the regime is overthrown”. Of course they don’t have the power to overthrow the regime so the membership in the group is long-life.

The least punishment is being insulted by your colleagues in a peer pressure open meeting. The other ways to suppress the opponents is force them for TV interviews to confess their alleged spying role for IRI. In my case, they beat me up to Ashraf Gate.

Q: Mr. Negravi, what message would you like to give to those who are still captured in Camp Ashraf?

A: I hope they will be released as soon as possible, and choose their fate with their own free will. I hope they are not frightened by Rajavi’s fragile power show-off.

-Thank you very much for your time to attend the interview.
Nejat Society