Iraq on Thursday denied it was preventing food, water or medical supplies from entering an Iranian exile camp it wants to shut down north of Baghdad. 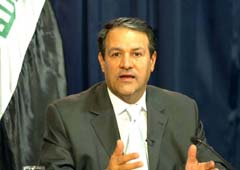 Government spokesman Ali al-Dabbagh denied reports by the camp’s residents, the People’s Mujahideen Organization of Iran (PMOI) dissident group, that its forces had blocked entry of food and water into the camp for at least 10 days.

"That is incorrect … We do not block food or medical supplies, but we do block building supplies such as cement and metal," Dabbagh said.

Iraqi forces last week took control of the camp on the Iranian border, home to the PMOI for about two decades, sparking clashes with residents in which at least seven exiles were killed. Camp residents said 13 were killed.

Iraq has said it wants to close the camp and send residents to Iran or a third country, a proposal they bitterly oppose. The government has not said when it might evict them.

Iraq’s Shi’ite-led government, which includes many former opponents of Saddam Hussein who were exiled in Iran, has close ties to Tehran and is unsympathetic to the PMOI.

The group began as Islamist leftists against Iran’s Shah but fell out with Shi’ite clerics who took power in the 1979 revolution.

Iraq, like Iran and the United States, sees the PMOI as a terrorist organization. On Tuesday, Iraq’s state security minister said none of the camp’s 3,500 residents would be granted asylum in Iraq.
Reuters, Baghdad –  Reporting by Mohammed Abbas