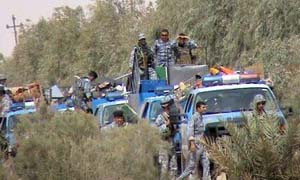 Prime Minister Nouri al-Maliki said more of next year’s budget should go to reconstruction rather than security, setting the stage for possible layoffs at a time when questions have been raised about the ability of its existing force to keep a lid on the violence.

The comments came the same day that a group of 36 Iranian opposition members were returned to an exile camp in northern Iraq after nearly three months in Iraqi custody and despite an ongoing effort to expel them, a government spokesman said.

About three-quarters of Iraq’s budget was used to pay salaries and operations of Iraq’s more than 640,000 security personnel, al-Maliki said.

"This is a dangerous phenomena for the Iraqi economy," he told a group of businessmen gathered in Baghdad. "Instead of allocating 74 percent of this year’s budget to pay salaries, we think that a big part of our budget should go to construction."

The comments came a week after Iraq’s deputy finance minister said that although the proposed $70 billion budget for 2010 is almost 20 percent higher than the one this year, it still falls short of the country’s funding needs.

It is unclear when parliament will vote on the budget.

The 36 Iranian opposition members were returned to Camp Ashraf, where nearly 3,500 members of the People’s Mujahedeen of Iran have been confined since the U.S.-led invasion in 2003, while the Iraqi government works to find a country other than Iran that will take them, said spokesman Ali al-Dabbagh.

"We demand the international community help provide a place for them because they are unwanted persons," al-Dabbagh said. "We are looking for a country that is willing to accept them."

The 36 were detained in July following a deadly melee between the exiles and Iraqi security forces at the camp, an incident that caused an international outcry from human rights groups and raised questions about the Shiite-dominated Iraqi government’s ties to Iran.

The men were detained during two days of confrontations at the camp that left at least 11 people dead — shot, beaten or run over by military vehicles, officials have said.
The opposition group claimed the 36 were on a hunger strike during their detention and were in a weakened state when they arrived back at Camp Ashraf.

The Iraqi government has said it was trying to establish a police station at Camp Ashraf and blamed the violence on the resistance by Iranian exiles.
Iraqi judicial authorities did not pursue charges against the men after their detention and ordered them freed.

The group, known as MEK, operated for years in Iraq under Saddam Hussein. The U.S. military turned over responsibility for Camp Ashraf to the Iraqis on Jan. 1.
The U.S. considers MEK a terrorist organization, though one that has provided the Americans with intelligence on Iran. The European Union removed it from its terror list this year. 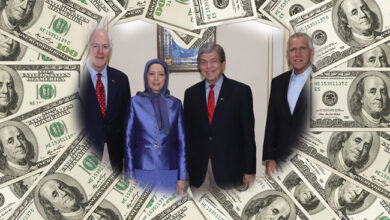 The Baffling Relationship between American Politicians and the MEK