The rise of false arguments to deceive public opinion is not something new but it is something common in mind control cults. 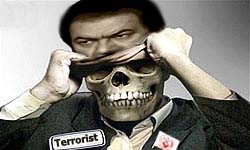 them although their reasoning might be extremely hard to believe or ridiculous. Like other destructive cults, MKO leaders are best known for their sophistries.

In his recent message on the occasion of Aban 13th (November 4th ,named the Student’s Day in Iran) the anniversary of the takeover of American Embassy in Tehran, Massoud Rajavi, the runaway ideological leader of MKO, sent his new message from his shelter; where he has been hidden since the American invasion to Iraq in 2003. The message is a perfect instance of the use of sophistry to obscure the truth for MKO’s mentally captivated members.

Once again Rajavi tries to state his silly theories to prove a relationship between completely unrelated issues. Then he concludes that the legal decision of Iraqi government to expel MKO from its territory is based on the call by Iranian government.

But he should answer the question: which democratic popular government is willing to shelter a terrorist designated organization with cult-like nature which might endanger the security of its civilians?

As it was published on Nejat Society website, the families of Ashraf residents has been gone to Camp Ashraf at least ten days prior to Mr. Ali Larijani’s trip to Baghdad. It is clear that Nejat NGO has already aided families to travel to Iraq, Camp Ashraf several times and this is not the first time. The claim of relating families’ trip to Ashraf with Larijani’s to Baghdad is not only fallacious but ridiculous.

Rajavi’s message contains a new and considerable point too and that’s the conditional acceptance of leaving Iraqi territory by Rajavi. Rajavi says that he welcomes the plan by Iraqi government to transfer MKO to a third country but “on condition that MKO’s properties and funds that have been produced by their own expenses and works for 23 years and mounts to 200 million dollars should be investigated according to lawyers’ opinions.”

There are various documents on how the MKO were funded by Saddam Hussein during the 20 years of being Saddam’s private army to provide him intelligence on Iranian interests during the Iran-Iraq war and cooperating with him in Kurds and Shiite suppression during the 1990’s. MKO was given a share of oil-for-food program outcomes by Iraqi former dictator. They became able to change the Iraqi desert in North of Baghdad to an oasis with various facilities by dollars granted to them by their ex-land lord.

Rajavi’s false reasoning for taking possession of a part of Iraqi territory or otherwise asking for 200 million dollars as blackmail seems so funny. Ashraf residents, who have been under psychological manipulation techniques of Rajavi’s cult, have never had a penny as their own personal property. How can Rajavi claim to have possessions in Iraq? The members have built some replicas of famous buildings and monuments of Iran and some other facilities for military training during the years of their slavery in Ashraf.

Another fallacious conclusion Rajavi makes in his so-called message is the unification of young Iranian protesters in Iran (following the presidential election) and Ashraf residents calling the young Iranians “Ashraf Marked”!

It is obvious that MKO is so unpopular among Iranians that hardly a small number of youth of Iran know about them and given that they have a little information on MKO, they absolutely hate them due to the treasons they committed against their own innocent compatriots during the three last decades.

Resorting to fallacy, connecting unrelated phenomena to each other and making unbelievable conclusions have always included the basis of Rajavis’ rhetoric. The co- leaders of MKO cult found a good way to entertain their members who are mentally and physically captured behind the bars of the cult.