Iranian opposition leader in Parliament
But her organization is on the U.S. terrorist list.

In front of a small fan was the Iranian opposition leader Maryam Rajavi welcomed when she arrived in Parliament on Thursday. Rajavi is in Oslo for talks on the situation in Iran – both on the

human rights front, and when it comes to the country’s nuclear program. She would particularly ask for Norwegian support to a camp for exile iranians in Iraq.

“I came here to ask the Norwegian government for help prevent a humanitarian catastrophe of historical dimensions in the Camp Ashraf, Iraq, "said Rajavi.

Bipartisan support
Rajavi was very well received in the Parliament. A smiling Marit Nybakk (Labor) gave the Iranian exile leader a hug, and in foreign and defense committee, she met representatives from the Labor Party, Progress Party and the Christian Democrats.

In the U.S. terror list
But Rajavi is a controversial figure: The group she leads, the People’s Mujahedin, should have been behind a series of terrorist acts against the Iranian and Western targets over the years. According to the United States, she leads a terrorist organization.

– What thoughts do you think is behind the designation of this organization as terrorist by the US?

– I have discussed with the Americans many times, and I think they are absolutely wrong. I am very pleased that the EU no longer has this attitude. I see this organization as an ally in the fight for a free and democratic Iran, "said Morten Høglund.

Terror
But religion researcher at the University of Oslo, Kari Vogt, looks completely different on the group leader Rajavi. 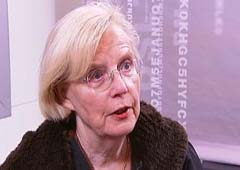 Religious Researcher Kari Vogt says there is no doubt that the People’s Mujahedin has conducted terrorist acts.

– Have they been behind the terrorist acts?

– Of course, they have,. They are a military movement based in Iraq and who collaborated with Saddam Hussein. For this reason they are seen as traitors in Iran, "said Vogt.

Limited support
The organization was formed in the 1960s, and helped to overthrow the Shah-board during the revolution in 1979. But soon they also ended up in conflict with Ayatollah Khomeini and his regime.

In the 80s, they fought on Saddam’s side in the war between Iran and Iraq. Today, the People’s Mujahedin is the largest group in the Iranian opposition umbrella organization National Council of Resistance of Iran of which Rajavi is also the leader.

Although Rajavi said that she leads a credible alternative to the regime in Tehran, and that the Islamic Republic have forced the U.S. to lead the People’s Mujahedin to the terrorist list.

“We were labled as terrorists by Mullah’s office. This is a benefit Europe and the United States have given to mullahs. This party means the end of Khamenei and Ahmadinejads regime …"said Rajavi.

Authoritarianism motion
When the U.S. is trying to appease the Iranian regime, Vogt was asked, who believes that the statement falls on its own absurdity.

“ This is definitely not a democratic alternative to the present regime. On the contrary, they are known for great an authoritarian movement with an emphasis placed on personality cult, "says Vogt.

“They have very limited support inside Iran. They have indeed supported in part by the exile community in Europe and the United States, but not inside the country. They do not represent the real opposition now. I think it is problematic, and in my opinion, politically compromised to meet this movement, "says Vogt.